books to read and games to play

videogames
January 10, 2008
Just Read: Ursula K. Le Guin's "The Lathe of Heaven"
Excellent quick sci-fi read, future discussion topic for my UU Covenant group. It starts with a Twilight Zone-esque conceit of a man whose "effective dreams" can reshape reality, creating an alternative earth with its own history and only he and the people witnessing the dream have any idea there was another path. It becomes a brilliant debate between the positivism of the man's therapist (who has a machine that helps induce deep dreaming and implants dream suggestions that he hopes will remake the world in a better way) and the natural Taoism of the man, who is deathly afraid of exercising a right he doesn't have to reforge the universe. 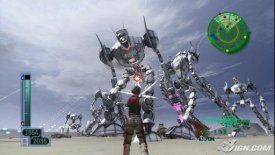 Fantastic B-movie of a game! A Scifi run-around and shoot things, with hundreds of giant ants, spiders, and walking robots marauding through cites with buildings that can be brought down by an errant rocket blast (doesn't really hurt you or the city, it seems... its rebuilt by the next level.) It also features some truly colossal enemies, like walkers about 3 or 4 times the size of a Star Wars AT-AT, and HUUUUUUUUUUUUUUGE spaceships that silently hang over the city in much the way that bricks don't.

It touches so many sci fi movie and literature tropes: So it's just fantastic. Watching the giant ants swarm up and over walls, engulfing the Seattle Space Needle-like tower in the distance, a Walker emerging from the fire and smoke from the wreckage of one of his brothers, guns blazing... really impressive.

It was odd though, the setting is Japan, and when the battle seems to be going poorly for humanity, the commander's radio broadcast goes with a theme of "well, we're screwed as a planet against this alien invasion, but let us show them how a real fighting force dies!" It made me think about the Japanese ferocity at the end of WW2...


"Well, with a sharp enough instrument, almost any passageway of the head becomes a path to the brain."

The conversation started with a reference those little ear lobsters from "Wrath of Kahn" and then devolved into various movies' way of invading the brain, like that one Schwarzenegger flick with big red bulb that gets pulled out of the nose.