japantravel
(4 comments)
March 24, 2008
Travelog of the Moment
So today I set off once again on my own to Kanazawa on Japan's west coast.

It was a rainy day in Shim-Matsudo, though... I was impressed by all the people on bikes with umbrellas. 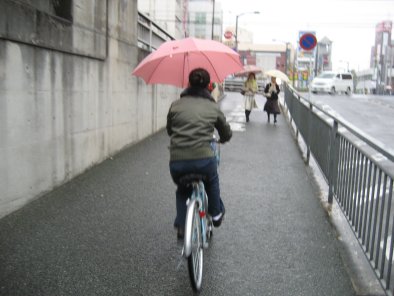 I was braving my first full-on Tokyo commute, but it wasn't bad as all that. I think I managed to avoid the worst of it by choosing cars at the ends, but I did see the classic image of uniformed railroad employees shoving folks in a bit further so the doors could close. I also saw these women with giant wicker baskets on their backs... 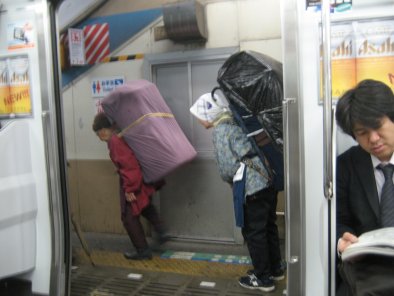 A beer ad I like, Josh says he's a well-known comedian. 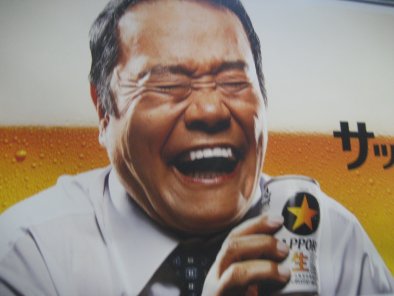 Random digital annoucment board.I was just impressed because between the resolution and the font, it was the least electronic looking announcement billboard I've seen. 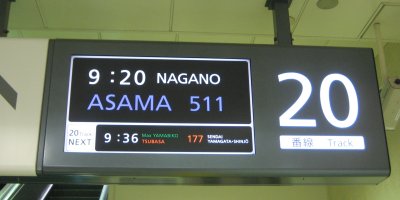 They generally have women cleaning all of the bathrooms, and guys just ignore them utterly and do what they need to do. 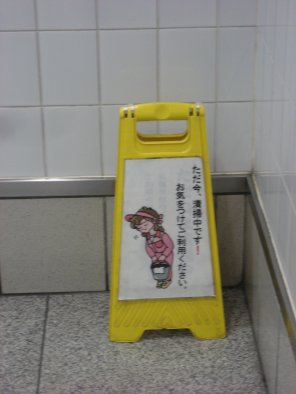 Sometimes, when two bullet trains love each other very much... 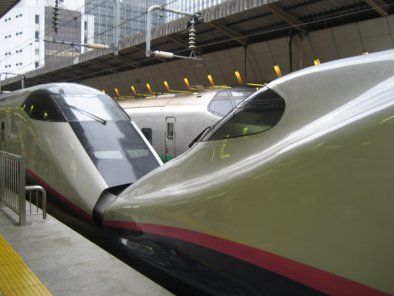 Shot from the train. I was in the bottom part of a 2 floor car, and the ground-level view was kind of neat as we sped past the platforms. 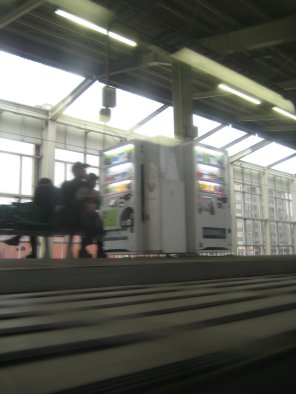 I changed trains in Echigo-Yuzawa. Outside the station things were covered with snow! (I was worried that I hadn't brought my fleece, but Kanazawa was only a bit brisker than Tokyo had been) 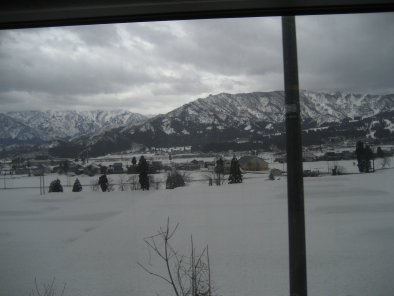 The scene outside the train was really beautiful; 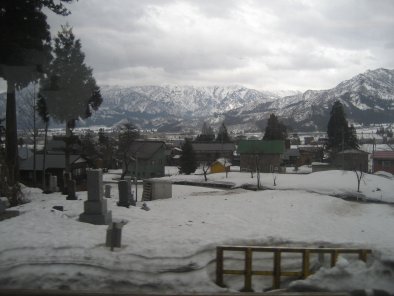 I was thinking about how I had seen the image of snow used in Japanese art, and now I know why... 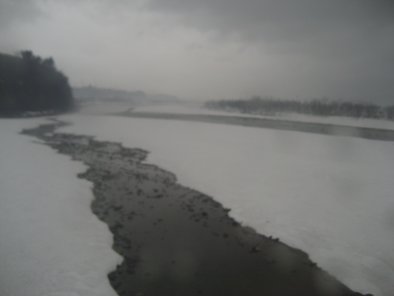 The train passed through tunnels (with a sudden pressure change to make your ears pop a bit) and eventually we got to ferris fairer climate... 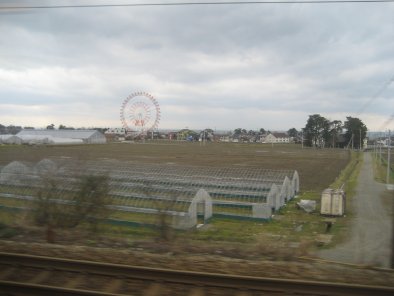 At the Kanazawa train station, I think this is some kind of advertisement for Hermes.

More lovely big architecture that you so often find by the train stations here. 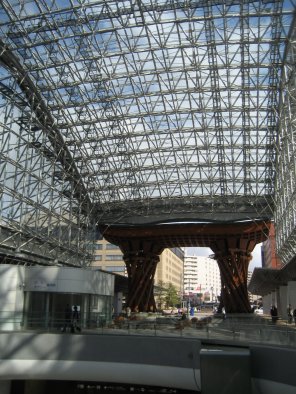 They also had a very clever fountaint, again with a digital clock, and then messages in English and Japanese. 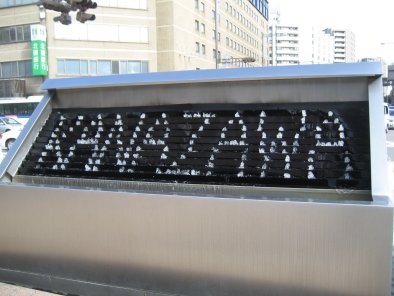 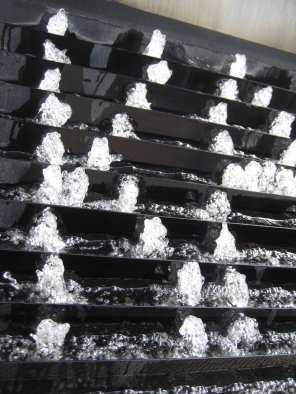 Kanazawa is a very art-minded town, from their historical arts and crafts to more modern fare. Statues grace many intersections... 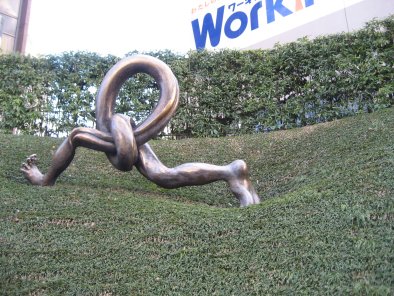 Sometimes they're all nekkid! 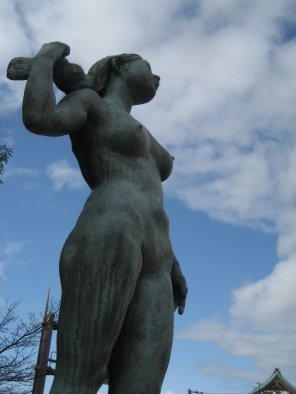 This is the Shinmon outside the Oyama Jinja shrine. It has stained glass at top, was made in co-operation with some Dutch, and once acted as a bit of a lighthouse. 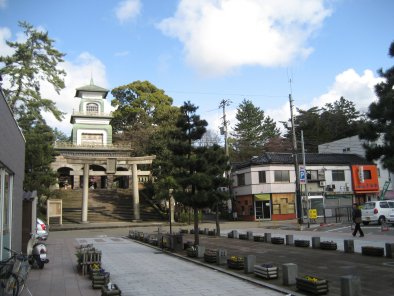 It had a lovely garden inside; Kanazawa has a lovely formal garden I'll be seeing, but this was a lovely contrast. 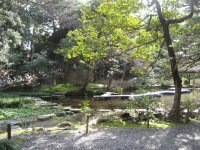 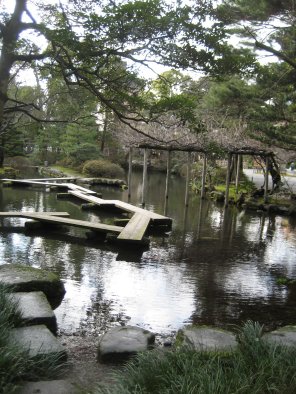 And a water strider! Hadn't seen one of those since summer camp in upstate NY! 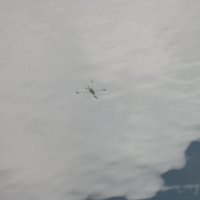 Close up of the map at the Shrine, showing the garden. I was thinking the street maps are odd here, because none of them seem to agree which direction to put North at. It occured to me that some of them may try to make it so the map is oriented with the way the viewer is standing, but even printed material can't agree. 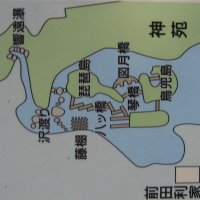 For some reason I wanted to take a picture of the lone figure in the park, but I like how the shot came out in general. 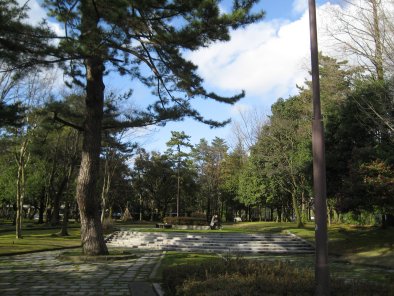 I stopped by the Noh museum. I'm kind of intrigued by the oldest living drama form, but even most Japanese don't understand it well. The museum didn't have a lot to it, really, but there was a nice video on Kanazawa in general that you could watch in English. 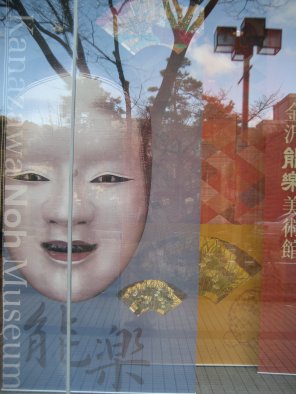 Again, I don't know what it is with me and random Japanese people, and how I take a picture of them but pretend to be mostly interested in something else. Guy and a bike and a cherry tree. 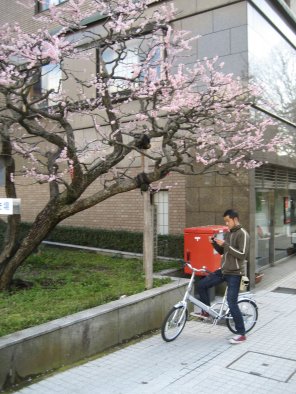 Finally, to the hotel. It's near a pretty happening place, as you can see out the window... 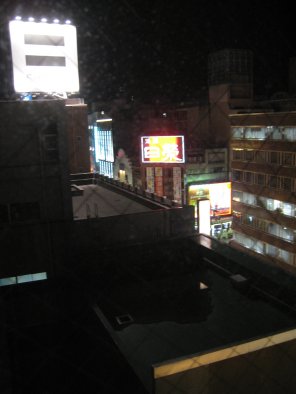 I'm at a funny level of "connectedness" when I'm on a trip on my own. On the one hand, sometimes I end up wishing I had rented a cellphone so I could dial up Josh and ask him things as they occur to me, othr times I think it's good to not be quite that wired. (Plus, maybe not having that security blanket is a positive for both me and Josh...) But I'm able to get online wherever I go, and make this travelog and e-mail and msg with people in the mornings and evenings, and that's a far cry from days of old, and there's a bit less adventure for that.

Also I think about how the camera changes my logging style; I think it's very cool and visual but I'm not writing quite as much, or as deeply. Maybe at the end I'll try to rectify that and go over some topics, for people here and for my future self. I hope people have been enjoying it this far, maybe the picture style helps people ahare in the experience a bit...