Sign on campus:
Vietnamese Student Ass.
Come eat our authentic food.
--Dylan's Blackberry
April 9, 2008
Random diet idea: I've noticed that dessert, something sweet, has become a bit of a "meal is done" signifier for me. I'm not sure if it's an unhealthy physiological relationship with sweetness, or just preferring that as the taste to linger. But I've observed that if I don't have something at the end of lunch, I'll end up seeking something out an hour or two later.

I wonder if I could parlay that into a way of having smaller meals; a "half" portion followed by something sweet, and I might be disinclined to eat more because of that taste.

I have dim recollections of toothbrushing being recommended in the same way, but that's more difficult to do discretely at the table.

Videogame Kinkery of the Moment
So in a Gamer's Quarter thread I found a kind of intriguing link about the game Portal; for the final confrontation with GLaDOS, the famously psychopathic computer program (think "Hal" but really really drunk) who has been your unseen (but heard) ally/enemy through the entire game, her physical form is not an abstract bunch of tubes and spheres but that of a bound and trussed woman, hung upside down from the ceiling. (The "artists rendering" on the page is possibly mildly NSFW, though not nude or anything.)

It was one of those things that I didn't notice on my own but, now pointed out, seems unmistakable, and it kind of changes the relationship between the player and the computer, or at least the computer and the laboratory organization. I decided to go back and see if it was as obvious as all that. It's clear that it is an inverted feminine figure, though the position of the other arm doesn't scream bondage so much: 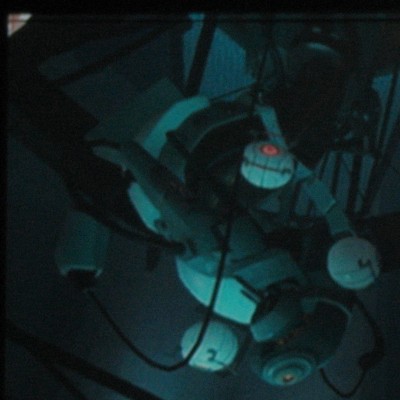 For the TGQ thread (amusing for some further "artist impressions") I also made some rough youtube movies, circling around GLaDOS from the beginning of the level, and then the very ending where it looks like her other arm is reaching to undo one of the "chains" before the final explosion/whirlwind occurs.