save the drama for obama

I have mixed feelings about Hillary Clinton as VP. For the most part I don't find her politics disagreeable (though I have my doubts about her Lieberman-esque puritanism) and I dig the idea of making the highest offices of the land not male-exclusive territory, but I worry about her as a lightning rod for the right, that her presence (along with "Clinton" being to right wingers what "Reagan" was to previous generations of lefties) might help McCain gather in conservatives who would otherwise look elsewhere.

At the risk of beating a dead horse, I really do wonder what life would be like with a Gore victory in 2000, what the nation's response to WTC would have been. Would we have invaded Afghanistan even? Had the same economic ups and downs, and inflation now? How would we have worked to contain Saddam? I don't want to play as if I think it'd be an unmitigated paradise, these are challenging times. But you gotta wonder, because thinking about that alternate history might provide some insight to what an Obama presidency will look like.

Line of the Moment


Q: What's dark energy?
A: The ninety percent of everything that's crap.

Found in Crummy.com, one of the few personal blogs I've been keeping up with lately. ...

The guy intermittently writes "Medi-Yorkers" (a pun on mediocres), like

This one uses the "cocktail party" New Yorker cartoon graphic. One guy says to the other: "So, what do you drink to forget?"

which brings me to my other link, Slate on how to win the New Yorker caption contest.

Man. Those things aren't all that funny, are they? It's as bad as things that have haiku contests.

Now a good limerick contest, I can get behind. Recent one by me:

a techie whose name was jacques, it
seemed like gals wanted his rock-et
try to reach his domain
but they'd always complain
'Fatal error: Could not create socket'"

Birthday of the Moment 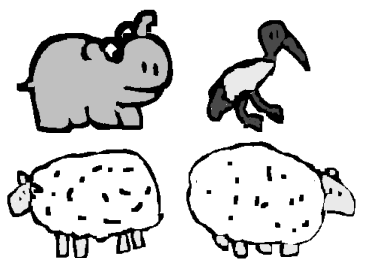 --Yesterday was Mr. Ibis birthday and rather than trying to swing a trip to Florida I drew a cartoon. The joke "hippo birdy two ewe" is straight outta Hallmark but it IS personalized with an Ibis.

Thinking about the "36 basic plots"... I have trouble thinking that abstractly, I'd love to see a list showing what real movies used which I find people in scrubs kind of hot. Now that I live near some big hospitals, this can be, you know, awkward. The Spanish Consulate is in my building... is the Spain->Mexico "feeling" similar to UK->USA? The folks have that euro-elegance... I carry my camera all the time as kind of totem to jujitsu murphy's law; it wards off "chinese curse" interesting/photogenic events. Oh for pete's sake! stupid cheap Papermate Profiles camouflaged as decent Pilot G-2s... grrr.