ramble
(1 comment)
August 18, 2008
It's been enlightening pondering the difference and similarities between EB, his outlook and ways of thinking, and my own.

Not that the SATs should be the end-all be-alls that we treat them as (And by we, I'm at risk for meaning "people who did well on them") but I was surprised he did better in the Verbal than the Math, though combined I technically beat him by 10 points. But given how entrenched he was in engineering I had always assumed he was more of a math guy, despite admiring some high-falutin' prose he had pulled together on the old tufts.general newsgroup.

But more to the point, I have a mind that enjoys flitting from thought to thought, where as his methodology is more of a focused charge. (This weekend he was a bit tired and preoccupied, which led to a higher number of half-finished thoughts and barely started sentences as different concepts fought to claim the focus of the track of his mind.) Historically, I'm almost able to keep up a conversation while enmeshed in a heated round of Dr. Mario or Puzzle League, while he greatly dislikes distraction.

Which isn't to say my tangential mind is inferior or superior to his goal-oriented approach. I envy and fear his long term game strategy making, to the point where I tend to dislike games that don't favor my scattershot, fast methodologies.

I'd like to think of other implications of this dichotomy. One is this: when I hear about articles along the lines of Is Google Making Us Stupid? it doesn't bother me too much; usually such an article isn't about being "stupid" per se, but retaining fewer facts in our heads that can easily accessed electronically, and indulging in a low-attention-span, high-connectivity (i.e. tangential links) form of mind play in lieu of the good hard think. But since this is how my mind seems to operate, and since I think I have a decent mind, I don't see it as much of a problem.

Another implication: decluttering and straightening up is an almost comically disorganized "oh do this no do this no that" for me where a dozen tasks get started but almost nothing gets done.

So how about everyone here? Are they more of a goal-oriented, focused thinker like EB? Or kind of a thought butterfly like me? Or something else? 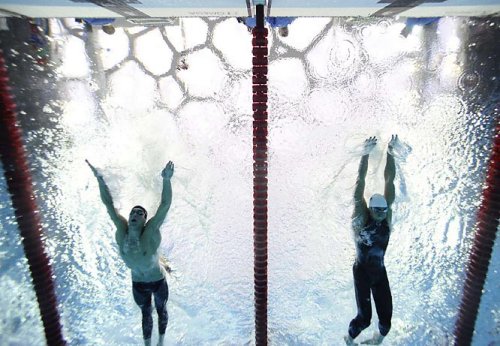 --I love this shot from an article on Phelps' Miracle Finish... from what little I've learned about sports in casually watching the Olympics, one bit is the final touch of the wall is hyper-important.

I also liked Usain Bolt's agenda (and his name!) on the day of his world-record beating time...

"Woke up at 11. Had some lunch -- some nuggets. Watched some more TV. Went to my room, slept for three hours. Went back, got some more nuggets, then came to the track."

What would just be a slacker's morning for anyone else sounds unspeakably cool when you're really achieving something special!

Weird dreams- MMORPG world where an emperor CEO had commanded mass suicide. People choosing whether to join in leaping off a 'scraper On Friday's rainout at Fenway, the Hot Tamale Brass Band was one of the few silver linings, other than the pleasant hanging out w/ friends. Using my ATM-card as credit card for a bit; w/ that and direct deposit, risk of nil budget tracking, just a money pile that waxes and wanes Forbes still does these autoadvancing slide shows. Quaint-and annoying, as if I'd rather sit + wait then just click. Probably good for ads.