on the vinegar tasters

ramble
(2 comments)
August 20, 2008
Lately I've been thinking about the following passage from the end of Tom Robbins' "Even Cowgirls Get the Blues":

In a place out of doors, near forests and meadows, stands a jar of vinegar - the emblem of life.

Confucius approaches the jar, dips his finger in and tastes the brew. "Sour," he says, "Nonetheless, I can see where it could be very useful in preparing certain foods."

Buddha comes to the vinegar jar, dips in a finger and has a taste. "Bitter," is his comment. "It can cause suffering to the palate, and since suffering is to be avoided, the stuff should be disposed of at once."

The next to stick a finger in the vinegar is Jesus Christ. "Yuk," says Jesus. "It's both bitter and sour. It's not fit to drink. In order that no one else will have to drink it, I will drink it all myself."

But now two people approach the jar, together, naked, hand in hand. The man has a beard and woolly legs like a goat. His long tongue is slightly swollen from some poetry he's been reciting. The woman wears a cowboy hat, a necklace of feathers, a rosy complexion. Her tummy and tits bear the stretch marks of motherhood; she carries a basket of mushrooms and herbs. First the man and then the woman sticks a thumb into the vinegar. She licks his thumb and he hers. Initially they make a face, but almost immediately they break into wide grins. "It's sweet," they chime.

I realize now, though, I was getting it mixed up with "The Tao of Pooh"'s telling of the story this drew from, "The Vinegar Tasters". Tom Robbins took out Lao-tse, gave his role to the couple, and added in Jesus Christ, with an interesting reference to the idea of divine sacrifice. 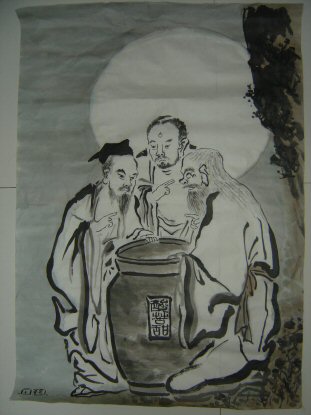 Something weirdly worldly in splitting a bottle of white w/ an old flame over dinner, later bar cocktails w/ my uncle. Like bad Hemingway. Gee, how can I resist a come-on (in french) from a skype bot named "! sex - sexy gazelle ejaculation feminine sexe"?