Followup of the Moment
So despite some discouraging technical setbacks, Team Cowsome Loneboys of the OLPC Physics Game Jam got a finished product in time for the judging... 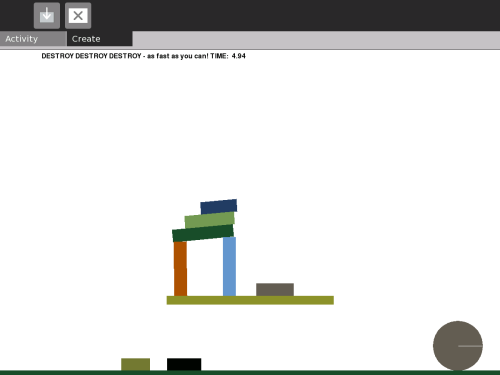 The game we presented, "Babel", had 2 phases... building and destroying. Building is taking 60 seconds to build as high a tower as possible, using a nice springy mouse tool to grab and sling blocks into place. Destroying uses the same mouse tool to grab bricks and fling them away, or possibly grabbing the wrecking ball for that purpose.

The game was surprisingly well-received... the educators in particular actually liked its simplified environment and focus a lot. There were only 4 or 5 games made, but we got a silver medal in "level design" (got the mug for that) and a bronze in something else.

Even after the judging, Jon and I kept on toiling to add an element that was part of our original vision: a slingshot! Now instead of racing against a timer, the goal was to use as few shots as possible to clear the platform area... 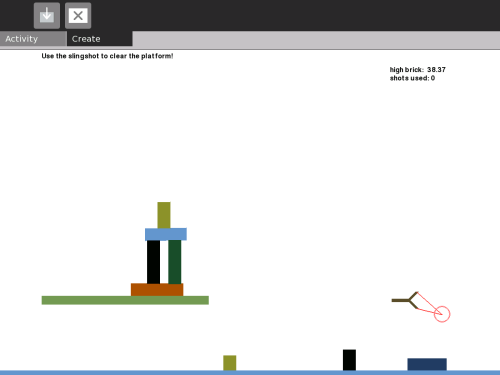 It's really a bit of a bummer that we didn't think to push on the slingshot ahead before... we probably could have gotten the basic version in, and it really made a much more compelling game, since rather than "use this cool tool to make a building... now use the same tool to destroy it..." there are two nice and distinct "aesthetic kinetic" phases.

It was great collaborating with so many clever people. Also, SJ, the organizer, assures me that the OLPC audience, school kids all over the world, is surprising voracious, and I think the game we made might actually get many more downloads and much more attention than most of the stuff I hack out on my own, so it was nice staying after to do it a bit better. (There are still tremendous ways of cheating, however... like dangling or flinging a brick over the tower area as time is up, and using the slingshot "backwards" to swipe bricks off rather than knock them out cannon-style.

The other games were pretty swell... rollcats was the belle of the ball, though some of the educators weren't as crazy about its simple puzzle mechanic, despite the lovely execution. My favorite among the other teams was "XO Olympics", an almost afterthought of a game where each player controls a kind of hopping triange to try and push volleyballs over to the other players goal... the interesting bit is each goal throws out the next ball (in the color of who scored a point) onto the field, but the old balls are never removed, so the scorekeeping becomes a part of the physics of the game... neat!

geek rant: maybe after ~52 hours of python hacking I'd learn to put "self." in front of everything? Nope! Same w/ forgetting str() for ints stepping into my dark bedroom after too too many hours of geekery, I longed for a sleepy, admonishing but sympathetic voice: "Hey, you..."