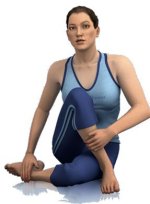 It's always a bit dicey to publicly discuss new diets and/or exercise programs, since they can sometimes be short-lived, but I'm kind of digging the new routine I have going with yourself!fitness and Maya, the virtual personal trainer.

It's a daily-or-so half hour routine, kind of aerobic-centric. It's a little more concentrated an approach than Wii Fit... rather than a cool balance board and related games and activities, it can use any heart rate monitor, hand weights, balance ball, or step that you have, if you have them. And the routines are more based on traditional workouts, not just a sense of fun play.

The routine is kind of nice. I like how there's a bit of a moving timeline (a bit like Guitar Hero) that gives an idea of where you are in a specific activity, I hate that feeling of "when the hell is this going to end?" Plus it's kind of nice not to have to deal with a person-person that early in the morning; my routine as of late is up a bit after 7, a bit over half an hour exercise with this program, then in the shower by 8 or so, and out of the house by 8:30.

The software isn't as intelligent as it could be, in terms of evaluating how faithful you've been and adjusting accordingly... for that matter, I think by now I was supposed to unlock stuff, either a new virtual exercise space or music set (the music is pretty humdrum synth stuff, but it gets the job done.)

The space I'm doing this on is kind of small, but with a little angling it works out. There is some good exercise karma in the apartment, Josh lost a lot of weight using an exercise bike every morning for a long stretch.

I think, though, what I really need to do is remind my body of some of the joy of moving... with an office life, you can get some walking in, maybe, but it's easy forget how pleasant it is to own a healthy, mobile body and to appreciate its range of possible activity.


Simplicity has real value on its own that makes the system more usable. It's the difference between reading a 100-page manual and reading a 500-page manual. It is more than five times the size.

Arnold also came up with that brilliant idea

Huh, I thought Tom Sawyer was an odd match for "League of Extraordinary Gentleman", but "Tom Sawyer Abroad" was a Twaine Jules Verne parody I say "Au Bon Pain" w/ an exaggerated Clouseau accent or as "The Good Pain" depending on whether I'm feeling more goth or emo that morning. Hated UI Paradigm:"gonna guess what you meant" from wikis autolinking camelCase to OSes that juggle windows when I try + park the mouse I'm getting way too much satisfaction from a 5, Insightful and 4, Insightful pair of moderations on slashdot.