September 24, 2008
Last night I went to the New England Lego Users Group meeting because I wanted to find a good home for my old lego instructions and catalogs and cutout boxsides) (I figure I can find what I need online now, and also one of the guys there, Bill, works with kids and they make montages from 'em.)

This month they met at the Burlington Mall Lego Store and hung out for a bit. Maybe 'cause I'm going through a bit of a "Dark Age" (what they call a period of time a lot of Lego fans go through where they don't do much Lego) I was a bit more stoked about building then and there than most of the regulars. 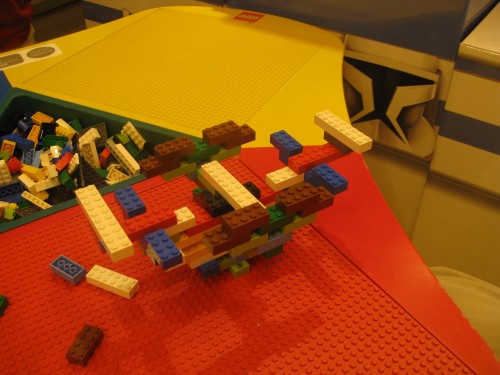 It made me realize how limited my Lego building has been, historically. I've had a very strong focus on making as cool a spaceship as possible. (That might be why I'm in a Dark Age... sometime in the late 1990s I started to feel that the sets coming out were cooler looking and better designed than the creations I come up with myself, which wasn't the case in the 1980s.) But it was nice just to build this tree-ish structure. (Later some kids moved onto the play table where I had left the Lego tree. I was amused by a parent trying to tell a kid not to touch what I had left behind. Legos aren't about Don't Touch!)

Most of the folks (9 or 10 nerdy-ish guys, though I heard rumors of women members of the group) bought a kit or two, or took from the "Pick-A-Brick". I decided to buy one of the grabbags. The bag had some odd remnants, a lot of light green and orange bricks, and little white "macaroni" curvy blocks. I made a vehicle: 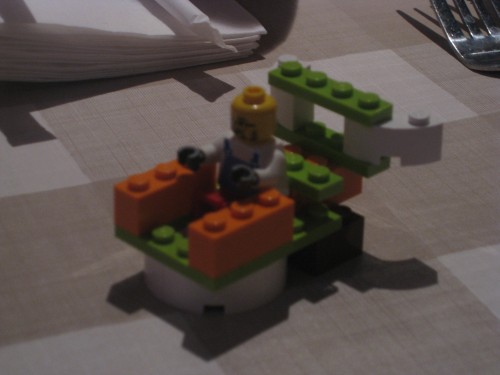 It was cool getting back to building with a small and motley assortment of pieces... my own collection is decent-sized, and sometimes the idea that "a better piece might be in there if I dig enough" can be a bit disheartening. Plus the grabbag had an awful lot of minifig torsos... 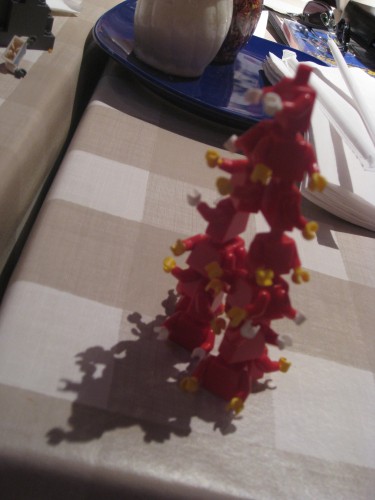 And a really disturbing number of tiny axes. I made a kind of centicentaur wielding two of them... 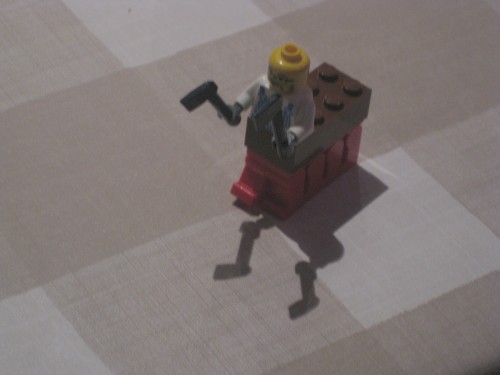 There wasn't much building, just what I was doing, and a few of my neighbors at Pizzeria Uno made a few constructions out of my grabbag. Bill showed off a great big pneumatic crane thing (an official kit) and another guy had a Tiamat multiheaded dragon which was an original creation, I think.

Had a hard time focusing in the light there. Also it made me a little sad that I didn't have digital cameras growing up, and/or an obsessive need to document my life, so I don't have visual records of the spaceships I was so proud of back then.

Nice driving by and getting a glimpse of Fenway all lit up with the radio describing the team celebrating a postseason spot clinch. There must be something akin to gaydar for Spanish speakers; alternatively, Spanish is gradually becoming a default language for commerce. "you know and i know you gotta move on the dance floor / we're blowing up this party with this sex bomb"