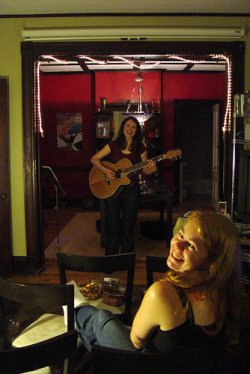 So this weekend I went to an interesting event... FoSO hosted a small concert in her home, the singer/songwriter Jess Yoakum. She did a set of songs (mostly her own lovely and sometimes moving work, one cover) accompanying herself on guitar, though on a few pieces she was singing to a recorded piano accompaniment.

Anyway, it was a great time, excellent music, a nice pass-the-hat hippy feel to it all. Jess has a blog about her "house tour" -- this was just the kickoff performance. She's associated with Concerts in your Home, it's kind of a small movement for independent artists.

Anyway, great music, and a cool event.
Excerpt of the Moment


All the time we are aware of millions of things around us--these changing shapes, these burning hills, the sound of the engine, the feel of the throttle, each rock and weed and fence post and piece of debris beside the road--aware of these things but not really conscious of them unless there is something unusual or unless they reflect something we are predisposed to see. We could not possibly be conscious of these things and remember all of them because our mind would be so full of useless details we would be unable to think. From all this awareness we must select, and what we select and call consciousness is never the same as awareness because the process of selection mutates it. We take a handful of sand from the endless landscape of awareness around us and call that handful of sand the world.


I read that book this past March, mostly on trains in Japan, and am rereading it sooner than I otherwise would because my UU Science and Spirituality group chose it as a discussion topic. (Probably in part because of my vigorous defense of it at the last meeting before Summer... I thought it was being unfairly maligned as "just a bunch of moraless hippies going around" or some such. But the person making the accusation had actually been thinking of "On the World", recanted, read the book and ended up liking it very much.

This paragraph really is hugely important in the setup for the Taoist-ish interpretation of the world that comes later in the book, and that final sentence is just beautiful.

Link of the Moment
After pointing out Twitter's "live politics" bit, I got some personalized email mentioning C-SPAN's Debate Hub including the gizmodo writeup.

Heh, I'm guessing C-SPAN must be monitoring sites that link to Twitter's feature and then writing relatively personalized notes to webmasters. (Relatively; it felt maybe a bit astroturfed, but not too blatantly Spam-y.) Still, it was pretty focused, and the C-span site seems to have some nifty knickknacks.

I guess I'm enough of a europhile that it seems weirdly cool to be corresponding with friends from there. And readjusting to still plan to have fun in an evening, even though it's seven and dark already, feels downright Nordic.