photos
November 3, 2008
So Obama spent $3-$4 million on that infomercial... to me that seems pretty cheap, able to create such a media event at the price of, say, 30-50 good urban annual salaries. (Not to mention, a tiny fraction of the bailouts we're all going to be a part of.) Which tells me, I have a very poor intuition about high finance. How does any company manage to employ anybody? I just can't grasp the scale involved -- even a figure as "humble" as the population of the USA -- 300 million and change -- is really beyond my ken. (Ever see that book with a thousand pages of a thousand dots, with certain milestone dots labeled, ala Guinness book of world records?) 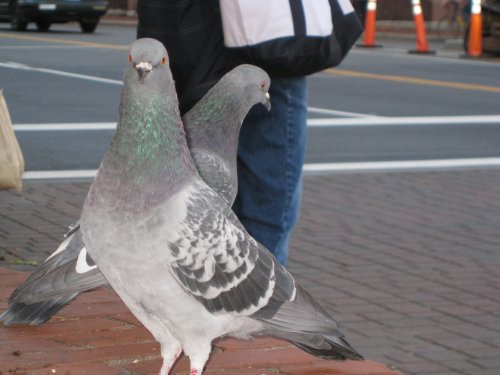 I always thought pigeons had a certain dignity, or at least can fake it a bit. Also, they look huge. 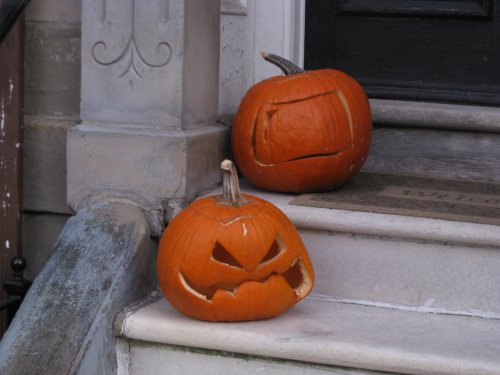 The wide mouth pumpkin loses structural integrity more quickly than it's minimalist "astronaut" counterpart. My Aunt claims 3 times she had the dialog "what's that top one supposed to be?" "It's a spaceman!" "...Oh, OK... I can see it... sort of". My Uncle points out that the bottom one now is a pretty decent likeness of Senator McCain.

Miller had a Halloween Party at my old apartment! 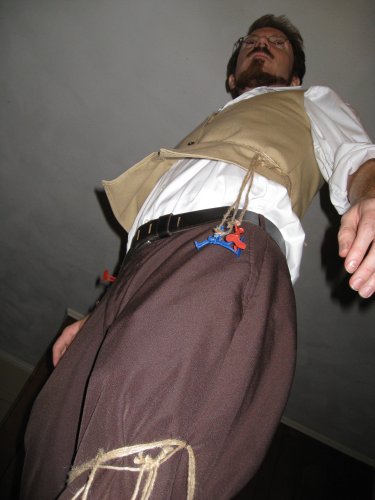 Tedd was Gulliver Unbound, little plastic Lilliputians dangling from the ropes. I tried to get a Lilliputian-eye view for this shot. 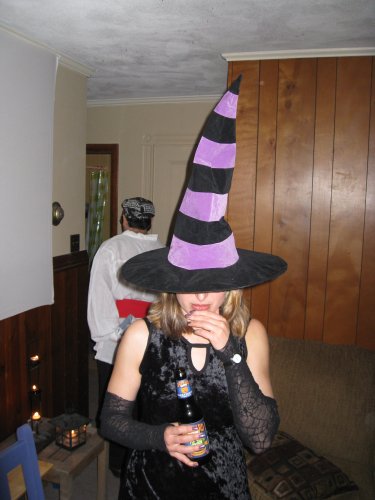 Ariana (inadvertantly?) re-enacting part of the poster for "Wicked". 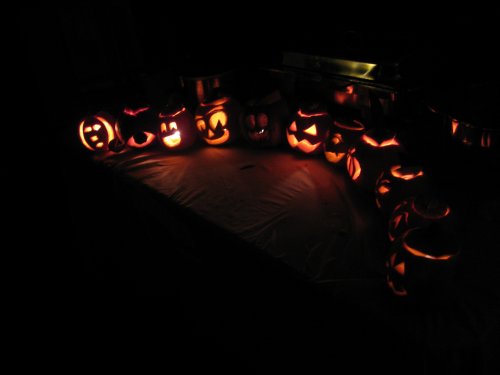 Thanks to the diligent efforts of Rhys, this party had pumpkins too! Small ones... Rhys accused me of remaking my previous pumpkin (sixth from the left, to the right of the dark one). I also tried to make an Alien Bill-o-Lantern (second from left) going so far as to adding his running arms with some pumpkin scraps attached with skewers. Unfortunately, it ended up more like meatwad from Aqua Teen Hunger Force.
Politics of the Moment
Slate was writing about both campaigns lawyering up and mentioned the "Brooks Brother Riot... I hadn't heard much about these wacky out of town Republicans that effectively managed to shout out the Miami-Dade recount in 2000 which in turn gave rise to the SCotUS stopping all recounts. Scary how much our republic was changed by this pitch fork and torches style management! (Like Marge Simspon says: "I guess one person can make a difference. But most of the time, they probably shouldn't.")

Obama's infomercial was $3-$4million. Doesn't seem like all that much, like vs. real estate, and to get to talk to everyone nationwide... Brazilian coworker mentioned that they'll say "he eats like an ostrich" to mean "he'll eat anything, indiscriminately". Interesting ref. Also: Brazilians don't have iced coffee.