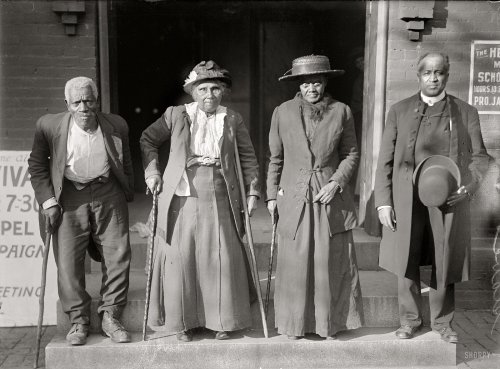 --from Shorpy's Page All but the man on the right are former slaves, 100 years old or more, reuniting in 1916.

Today shouldn't be all about race, just like it shouldn't be all about politics. But: for the first part of these lives, these people were considered non-people. Thinking of that transition, from property to citizen, is mind-blowing. I know when this picture was taken, there was still decades until the Civil Rights Movement got into full gear, and more decades until a black man could hold the highest office in the land. And I know that we still have a society with a lot of racism both obvious and subtle.

But still: this is a great day for the United States. Greenline drivers are goddamn liars. Disregard the sweet pearls of "there's another _-line car right behind this one." FFS. Hey, new president today!

I wish you had, but I'm glad you didn't.

Come to think of it, I grabbed some of the best of Wired's 6 words contest: http://kirk.is/2006/10/26/ I love how MA governor Deval Patrick was *totally* the practice round for Obama. He's like our own Obama mini-me! Great "presidential approval rating" graphs - http://tinyurl.com/2apqfe - funny how it's as much about events as the person.

Democracy is a harsh employer.

:-( Amazon's MP3 only has Nigel Tomm's cover of Cage's 4'33", not the original. (And track 9 is more like porn - http://tinyurl.com/7tfcpw ) Digging the prominence of sousaphone/tubas at the inaugaration! Happy that Obama made rhetorical space for non-believers along with believers. Are all those "Count down 'til Bush is Out of Office" tickers showing negative now, or what? Good: Use of the economical term "Black" instead of "African-American". Bad: Damn it, Dow, stand up with a little support here, jerkies. Seriously, screw you Wall Street. The Mission Hill public elevator is missing a few teeth at the top. You kind of hope there's not a painful story behind that. I do not reommend Orbit's Maui Melon Mint flavor.