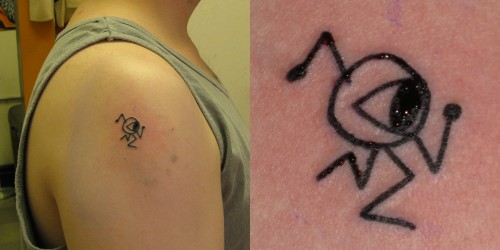 I brought in a print out of the other day's entry, mostly to show Alex the Japanese woodcut (turns out he does prints and woodcuts as well) but he picked up on the idea of using the "oldest extant" Alien Bill, the same one I've been using as an avatar on websites -- he blew up the image a bit and used it to trace, essentially. I think it was a good choice, a bit looser and more dynamic than I usually draw him these days. I think Kate was right in suggesting holding off on the speedlines, the looser draw manages to be balanced without them.

Periodically throughout the day it strikes me as an odd thing to have had done, but overall I dig it. Actually it's kind of funny to think of how relatively rarely it will be seen.

Anyway, I'd endorse Fat Ram's Pumpkin, it was a great experience (even if my tattoo was one of the least challenging possible, and not representative of what all Alex and the rest of them can do.)

I guess everyone gets tattoos for their own reasons, but it's interesting that there are a lot of other tattoos I look at online that I don't "get".

Ultimately though, it's weird. The "decision" to be fit or flabby aside, a body just kind of is. There's something transformative in proactively altering it. You get something a bit similar with a haircut or glasses, but that's temporary, and altering the presentation of the face, rather than the body.