historyfamilyrambledad
(5 comments)
September 9, 2009
Today my dad would have turned 60.

6 years ago (six! wow, what a number - college plus half of high school! The speeding raceway of time reminds me why I was so anxious to start dropping these daily bread crumbs for later leisurely perusal!) I had noted I had lived as many days with him as without him, and wrote a kind of tribute that I probably shouldn't try to top here. In 4 years, May Day 2013 (assuming the 2012 doomsayers prove as wrong as every date-based doomsayer has been thus far) I will be as old as he was when he died. I guess I should get over it some time? Or maybe parents are just that kind of thing you never have to get over - maybe especially if you haven't had kids of your own.

(Again, you can calculate your own happy or sad little milestones with that date toy tool I threw together in 2001.)

I've tended to express my regret in terms of be being a graceless adolescent when he died, that so much of the becoming I've done, that I'm most proud of because of its deliberate nature -- I think before you're a teen, you kind of just are -- happened after he passed. But now, coming up to the ages I have memories of him being at, I can think too about how many interesting paths could have been before him... I listed a bunch of things he'd done in that essay, and sometimes I'm still in a bit in awe. 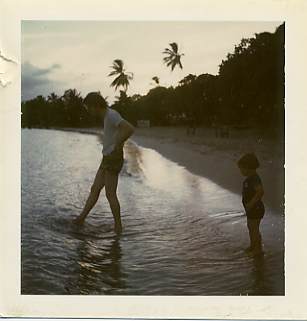 One interpretation I tend not to over-emphasize is that of all the people who've been in my life since his passing, I think I most saw echoes of a kind of insecure, maybe-compensating but still admirable use of books and diligent study to achieve various expertise in Mo. And their style is in contrast to my own too-smart-too-young, ego-protecting comfort zone I drift in when left unattended. I mean, there's a lot to be said for low-hanging-fruit, but over the past few years I've been working on putting up more of a fight for "stretch goals" that seem worthwhile.

Heh, it's another dumb little milestone today - the tenth anniversary of the 9/9/99 release date of the Dreamcast, a video game system beloved in the hearts of fanboys, but ultimately walloped by the DVD-playing, somewhat-more-powerful Playstation 2. I wonder what my dad would have thought of me and video games - not that it's such a big, time-consuming thing for me these days, but over the years I've sunk a lot of dollars and a lot of hours into them - but they were pretty primitive back when he was watching my early fascination with them. Lately I've been pleased by one thought though... here's a (pooorly photographed) example of some of his cross stitch (an inuit design I believe) 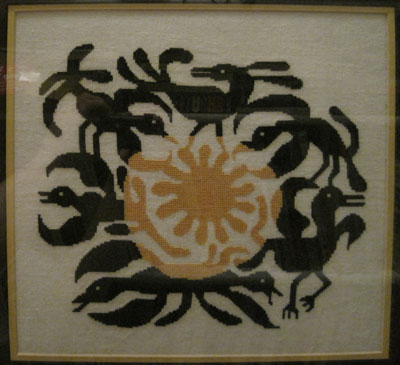 Man, what is cross stitch and needlepoint if not a crazy kind of folksy pixel art? So our interests maybe weren't as far apart as all that. (Hell, we might've collaborated on some of this stuff, I'm sure modern stitchers use all sorts of scanning and conversion high tech tools, rather than being solely reliant on the type of pattern books my dad had (and I remember being kind of fascinated by as a kid.))

Sigh. Guess today I'll fire up the old Dreamcast and... I dunno, try to have some place that cooks hot dogs in beer or something, like I think my Dad said they did in Ohio...