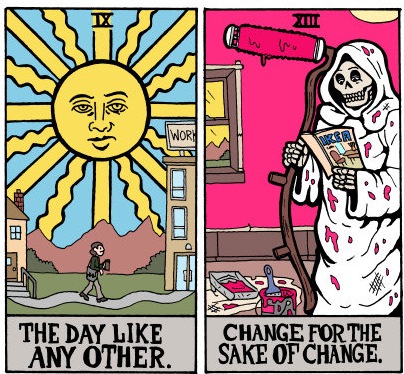 --from Cracked.com's Tarot Cards That Might Actually Predict Something

http://www.retrosabotage.com/mario/jumping.html - deconstruction of the italian plumber

I'm, like, the black Greg Louganis of ice skating.

Ugh, Haiti. "I had the flu yesterday, and I feel all wonky."
"You own a giant chocolate factory staffed by pygmies?"
--Cashan Stine and Danny Sichel I used to think learners were either "memorizers" or "learners" - i.e. people who were better at memorizing factsvs those who learned basic concepts and applied them as needed. But maybe it's more like... "nouns" vs "verbs".

Spelling is nouns but English (literature) is verbs. Foreign language, "nouns". Physics is verbs, Chemistry nouns, which is why I think I was so much better at the former. Math was delightfully verby for me 'til Calc, then I started having to memorize more formulas that were too complex to figure out in real time.

Programming for me is verbs. When you understand the verbs, how things interrelate, you can easily google for the "nouns" that you expect to be there. Of course this is why I'm not a fan of big toolkits that promise to do everything for you once you set them up correctly - you get all the nouns setup and configured, but if the verbs don't end up being what you want, figuring out what went wrong and how is much, much harder.