listen all y'all it's the sabotage

--My kinda unfinished entry for Klik of the Month #35. Arrow keys move, z shoots. This is a rough copy (sans scoretracking or ending) of a game I played on PC in the early 90s, which in turn was a stripped down version (dropping the 'waves' and jets and bombs) of an old Apple II game Sabotage.

The PC version also had "gravity bullets" that were pulled down by gravity to help clear out landed troops, but I thought that might look a bit odd. A shared Google calendar, synched with iPhones/iPod Touches, has proven to be a bit of a relationship saver, or at least helper. 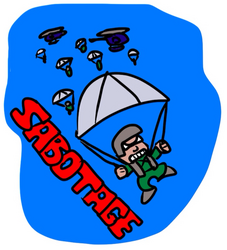 One way Starbucks beats Dunkin Donuts: w/ iced drinks, the lid straw hole is 3 cuts, not a 2-cut cross; easier to insert and preserve straw. The post-facto insert of "under God" wasn't just bad secularism and bad pluralism, it was bad poetry that breaks the rhythm of the Pledge.