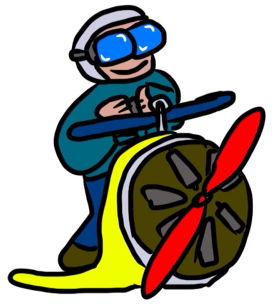 --This vehicle came to me in a dream, though it's probably straight out of Miyazaki's "Möwe" aircraft from his movie Nausicaä.... it was like the front end of an old-timey biplane but the wing was small and detachable and it only flew it a walking pace-- kind of like a flying Segway, in practice.

I'm really glad the iPad lets me get stuff off like this down, and then online. Glad the wristwatch is on the way out replaced by pocketwatch-ish cellphone-will we still make the 'glance at wrist' gesture for impatience? http://www.slate.com/id/2254863/ -interesting bit on Stop Signage (first video link is great) BUT- are full stops that much better than alert "rolling stops"? It kind of begs the question if they are. Hey IBM! Rather than having red lights disable people's cars, lets make red lights smarter about the traffic around, eh? It's a crime that I have to sit and wait for the stop light at an othewise empty intersection. You know what? Screw Photoshop's "oh I can't possibly include those 100% transparent pixels in the selection" stance-Jimminy F'in Crickets!

The key to understanding the past is the knowledge that people then did not live in the past--they lived in the present, just a different present from ours. The present we are living in will be the past sooner than we wish. What we perceive as its uniqueness will come to be seen as just a part of the past as view from the point of a future present that will, in turn, see itself as unique. People in history did not wear quaintly old-fashioned clothes--they wore modern clothes. They did not see themselves as comparing unfavorably with the people of the future, they compared themselves and their lives favorably with the people of their past. In the context of our area of interest, it is particularly interesting to note that people in history did not see themselves as technologically primitive. On the contrary, they saw themselves as they were--at the leading edge of technology in a time of unprecedented change.

Man, I really have a hard time adopting his view for the 70s. Plus, for the record, I do kind of compare myself unfavorably with the folks of the future. Assuming stuff doesn't turn all Mad Max.