quotes from how the mind works

quotes
August 19, 2010
I just finished Steven Pinkers excellent "How The Mind Works" -- in reading it electronic form I made a backlog of quotes from it, often him quoting others but some new passages as well...

I don't like spinach, and I'm glad I don't, because if I liked it I would eat it, and I just hate it.

No, but for two brothers or eight cousins.

It takes a mind debauched by learning to carry the process of making the natural seem strange so far as to ask 'why' of any instinctive human act.

If there were a verb meaning 'to believe falsely,' it would not have any significant first person, present indicative.

There's one way to find out if a man is honest: ask him; if he says yes, you know he's crooked.

Was it a millionaire who said 'Imagine no possessions'?

Natural selection does not forbid cooperation and generosity; it just makes them difficult engineering problems, like stereoscopic vision.

Parental love causes the fundamental paradox of politics: no society can be simultaneously fair, free, and equal. If it is fair, people who work harder can accumulate more. If it is free, people will give their wealth to their children. But then it cannot be equal, for some people will inherit wealth they did not earn. Ever since Plato called attention to these tradeoffs in The Republic, most political ideologies can be defined by the stance they take on which of these ideals should yield.

This says so much to be about the male condition. Like Susan Sarandon's character says in "Bull Durham", "a guy'll listen to anything if he thinks it's foreplay"...

Theology is the effort to explain the unknowable in terms of the not worth knowing.

The conclusion of the book was a pitch for the idea that maybe brains aren't smart enough to understand themselves; that we're darn lucky to be able to figure out so much of the universe, from atomic theory to art, with a brain that was basically setup to help us navigate complex social relationships and manage hunting and gathering... as he puts it:

We can well imagine creatures with fewer cognitive faculties than we have: dogs to whom our language sounds like "Blah-blah-blah-Ginger-blah-blah," rats that cannot learn a maze with food in the prime-numbered arms, autistics who cannot conceive of other minds, children who cannot understand what all the fuss around sex is all about, neurological patients who see every detail in a face except whose it is, stereoblind people can understand a stereogram as a problem in geometry but cannot see it pop out in depth. If stereoblind people did not know better, they might call 3-D vision a miracle, or claim that it just is and needs no explanation, or write it off as some kind of trick.

So why should there not be creatures with more cognitive faculties than we have, or with different ones? They might readily grasp how free will and consciousness emerge from a brain and how meaning and morality fit into the universe, and would be amused by the religious and philosophical headstands we do to make up for our blankness when facing these problems. They could try to explain the solutions to us, but we would not understand the explanations.

Wish I had someone who was an advocate for divs vs tables, layout-wise, and not sick of arguing about it. To me it seems that tables provide a robust, flexible, "stretchy" grid-style layout, and avoid some of the weird alignment crap you can get into with float and overflow issues with div-- but I hate designers thinking I'm sort of Web 1.0 baboon for thinking this way. It's not like I'm advocating giving up CSS styling... Skywriters at the Public Garden- it says INTL AIRSHOW- you know skywriting is cool but the dot-matrix type seems a bit lazy... 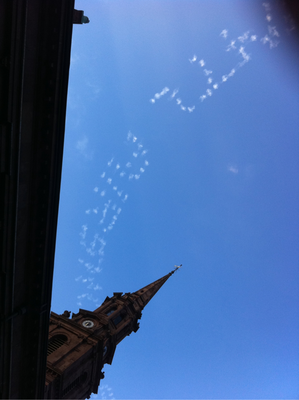