This is the main review I've read. Conceptually I dig the stark, uber-minimalist no-stickers-whatsoever case, but beside that, this thing seems as boring as possible. To quote the review:

I have to keep reminding myself of the OS' fundamental concept: a Chrome OS notebook is absolutely zero-percent different from any Windows, Mac OS, or Linux notebook running Google Chrome in fullscreen mode.

So, if my disdain for the Cr-48 is shortsighted, it would probably be because I'm downplaying the potential coolness of the Chrome App Store -- is it possible that this could become as intriguing as the Apple App Store? My guess is no... iDevice apps get a boost because they are touchscreen at their heart, and based on what I was saying yesterday, I think that's an important difference that will last even after the novelty has worn off.

So we have a boring, browser-only laptop: the difference is, this laptop is an experiment in Life on the Cloud: none of your files are stored locally, they live on the 'Net.

This seems like yet another attempt to make dumb terminals cool. And that is a misguided effort. To quote that review again:

But without a connection to the Internet, this cutting-edge machine had become little more than a Notebook-Shaped Object. The six or seven open browser tabs in front of me were just ghosts of webapps that joined the choir invisible as soon as they lost contact with their servers.

In other words, you have nothing with you. And not to sounds like a luddite, but people like to own things. Even with ebooks, your books feel like you kind of own them in a physical format. Thanks to DRM this a bit of an illusion, remember the uproar when Amazon "took back" copies of 1984? But there is something to it -- even offline in a tunnel, your titles are there for the reading.

(Similar with movies and shows -- now, through the relatively brief history of audio/visual entertainment, the time we've been "owning" shows is pretty brief - people went out to see "Gone with the Wind", waited at home for "I Love Lucy". In the '80s and '90s they could own a VHS of "Ferris Bueller Days Off", tape "Friends", DVR "Lost", and get a DVD of "Amelie"... with the rise of Netflix, we've regressed a bit, and streaming might become the preferred way of watching movies, but still, I think stuff like Blu-Ray will have a place as people want to own some physical thing.)

I dunno, maybe I'm overplaying the ownership aspect. I agree with Richard Stallman that it might be Careless Computing -- you are REALLY trusting these companies with your stuff. But when I think of the bulky stuff I keep on my main PC -- photos and music, I guess I could see a life depending on a Picassa and/or that long awaited "Cloud iTunes", and it would be livable -- though I think the absolute dependency on a robust connection is foolhardy. You know, for AT+T and other reasons there are many places my iPhone has no 'net connection. And my iPad is offline on the subway, and still fun.

The author of this article, though, would think I Just Don't Get It. John Brownlee writes:

Think of what Chrome OS represents: the bare minimum operating system necessary for tapping into the living ebb of the Internet. Google has polished this window thoroughly. Chrome OS is mindless to administer. The UI is uniform. Legacy support has been thrown out the window. It's immune to malware. Battery life is extreme. It's even immune to system failure; if your computer breaks, your operating system corrupts, all you've lost is the glass and a frame, and the world it conveys still exists outside it. All you need to do is find another window.

It's kind of a cool idea, but you know? I kind of do the same thing already. All the files I'm concerned with on my laptop, I keep in a folder: C:\data\ -- that's the folder that makes it "my" laptop, that's the directory I backup, and when I upgrade, or if something happened to that laptop, all I would have to do is go to that backup, and suddenly it's "my" machine again.

Brownlee is wicked enthusiastic about the idea of "Nothin' but Net". The most interesting part of his article was quoting Beatrice Warde's broadside:
THIS IS
A PRINTING OFFICE
CROSSROADS OF CIVILIZATION
REFUGE OF ALL THE ARTS
AGAINST THE RAVAGES OF TIME
ARMOURY OF FEARLESS TRUTH
AGAINST WHISPERING RUMOUR
INCESSANT TRUMPET OF TRADE
FROM THIS PLACE WORDS MAY FLY ABROAD
NOT TO PERISH ON WAVES OF SOUND
NOT TO VARY WITH THE WRITER'S HAND
BUT FIXED IN TIME HAVING BEEN VERIFIED IN PROOF
FRIEND YOU STAND ON SACRED GROUND
THIS IS A PRINTING OFFICE

Stirring words! Brownlee makes a hackish paraphrase of to conclude his piece, substituting "Internet" for "Printing Office". But I thought one of the comments (by "hello") rephrased it in a much more realistic way:
THIS IS
THE INTERNET
CROSSROADS OF CIVILIZATION
CO-OPTER OF ALL THE ARTS
ACCELERATING THE RAVAGES OF TIME
ARMOURY OF BASELESS SPECULATION
FURTHERING WHISPERING RUMOUR
INCESSANT DEGRADER OF LABOR
FROM THIS PLACE WORDS FLY ABROAD
TO PERISH ON FIREWALLS
VARYING WITH THE BROWSER AND STYLESHEET
UNFIXED IN TIME, DYNAMICALLY GENERATED, UNDEFINED BY PROOF
FRIEND YOU STAND ON SHIFTING SANDS
THIS IS THE INTERNET

I love the internet, but you need to take it with a grain of salt the size of Pittsburgh.

Anyway, the potential ephemerality of our bits is a big problem for our tech-dependent civilization in general... another commentator wrote:

To put it another way, the archaeological value of a cr-48 is roughly that of a stone knife; it will tell our descendants that we had a culture, but (except what they can glean from the silkscreening on parts) will leave them no direct artifacts of it other than the machine itself. A long-dead computer might harbor something readable on a hard disk; a partially recoverable song, some text, perhaps, possibly more. The cr-48 is a tombstone and nothing more the moment it loses the cloud.

I used to get nightmares about "the giant EMP pulse" that takes down our society, and it still bugs me somewhat -- you kind of hope some not-to-radically-nutso survivalist-minded folks are taking steps to, say, know how to build a primitive by today's standard PC and other things that would have a chance of reading material we insist on making electronic only -- and while they're add it, store some useful technology-and-society-rebooting books as well.

And that note, to make up for a long and boring article, here is an interesting photo of a ship cut in half: 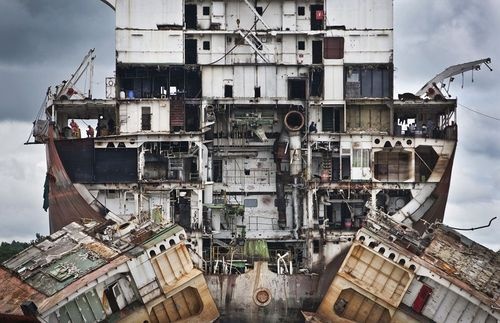 (Maybe my fears about ChromeOS taking off are moot anyway)