videogames
February 1, 2011
So even though SREDAVNI didn't show my team's artist's at their most technical, it had some enjoyable art, some of which didn't get used in the final cut of the game.

Here was the original crew of aliens:
Later though, in lieu of a credit screen, we decided to retool the invaders so they lined up with members of the team:
(I'm the one with the glasses, natch.)

Right now they're marching in lockstep, but if you put the mouse over one group, they will be very happy, and the other group will be sad. (We didn't end up using the Happy/Sad states in the actual game.)

I think the invaders were mostly done by Kelly Atwood though Yue Li (who pitched the original idea) might have done work on them as well.

Everybody is trapped, more or less. The best you can hope for is to understand your trap and make terms with it, tooth by tooth. 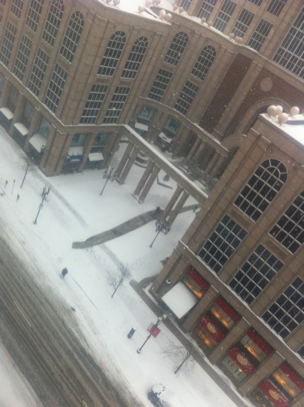 Snow Biking is crazy fun. Accent on the crazy. And the fun. http://waxy.org/2011/02/metagames_games_about_games/ I enjoyed reading about and trying some games that think about their box.