videogames
February 19, 2014
Some of my thoughts of a super-productive staycation have been thwarted by the arrival of the video game "Earth Defense Force 2025", a solid sequel to my (previous) favorite B-movie game "EDF 2017". I am enjoying the heck out of it, honestly- it mashes together two of my favorite things in video games: gun battles with simple tactical decisions to be made (what the earlier game had in spades) and flying and gliding over a city's landscape. (thanks to the addition of a Valkyrie-like character with a jet pack.) Plus, Spoiler: flame throwing dragons. They're done quite beautifully, often set against a moody twilight time... pity you have to shoot them! 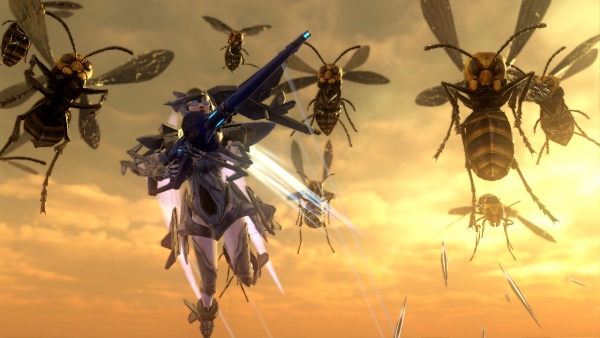 "Binge gaming" seems to be my preferred way of consuming games these days... but it makes me ponder why this type of gaming is so appealing in general- it certainly has its tedious moments! And it's a bit hard to defend as a cerebral exercise. I think it's a combination of two things: a viscerally appealing simulation of exciting things I can't do in the real world (flying, saving the earth from endless hoards of homicidal robots and giant insects) along with an environment were dogged persistence guarantees success, and where it doesn't, these days that's probably a "fault" of the game designer and not the player.

I think overall I'm more relaxed playing the game all Tuesday and Wednesday night than I was coding up my own game all day Monday; no angst eating, almost no ducking over to twitter or Facebook to get away.

I do wish I had a gaming buddy... it has an excellent splitscreen mode. I played the earlier title with my Jonathan and it was a great bonding time... alas he's a family guy now and I am on my own.