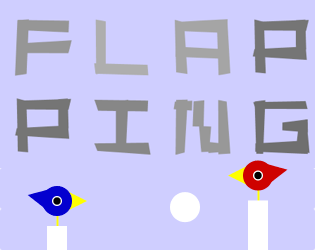 click to play
For the Flappy Jam, in honor and support of the lamented game Flappy Bird I redid a (one player) version of my original Atari 2600 title JoustPong / FlapPing. You can play it online.

Has a tuba version of the original theme song and everything! At first I did a version with the walls of the "Poorlords" variation, but I think I prefer the simplicity with the original, though with Pterodactyl of the 2600 version replaced with an annoying crow. it's funny how stress builds in layers, and in the end I snap at dumb stuff-- probably there's that baseline of new
job in the back of my head, not getting as much done on my comic as I hoped... it means that ridiculously awful Nintendo Wii U UI and friends accidentally ordering off the menu is irritation amplified beyond what is reasonable.