Aargh. I agreed to catsit for a coworker's cutie Persian kitty for 3 weeks. She and her person got here via Uber late last night, I drove the person home... I have not seen said kitty since.

I was vaguely uptight about not seeing her on my return, but just went to bed (I feel like at some point I felt her walking on the bedcovers, but wasn't awake enough to confirm.) And now I'm worried. My housemate and I have done a reasonably thorough "look in everything" tour with no luck and I don't know what to do now, left out some food and am trying to remember how it looks so I can tell if it gets nibbled at.

Either she is freaked out and very good at hiding (probably the most likely scenario), she zipped out with an open door (though we've been watching) or she found some exit from the house (which in someway is a variant of the first scenario)

Ugh. I feel horrible but also not like there was much I should have done differently.

Frickin' cats. Kitty has remerged! Two final ways for Patriots fans to savor last Sunday, and then "We're On to 2015": 1. this photo - I am amazed at how Ricardo Lockette looks like a tumbling bowling pin in that shot. 2. Bill Simmons grantland piece is some of the most detailed and energetic football writing I've ever seen (I don't catch like half the references) recapping the 3rd quarter (I missed how the ref TOTALLY got in the way of the Pats Defender on that Doug Baldwin TD with the poop-the-ball celebration) and then doing detailed play by play. The final analysis: as much as the would be smart fans think BB shoulda called a timeout, there's a chance his experience with the crazy pace of big game endings led him to think that making a stand had a better chance than trying to drive for the FG. 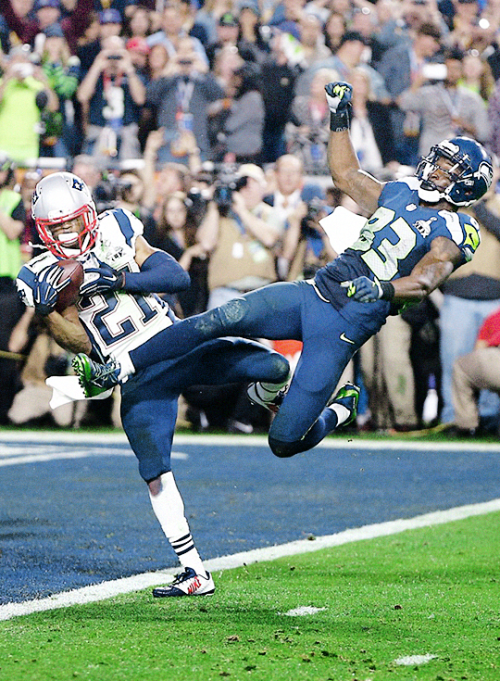 Listen to music off the "Broad City" music pickers playlist, trying to decide if I like "Azealia Banks - Desperado"... I realize that my "3 Star and Up" criteria for adding songs to my music collection has a direct correlation to "The Life-Changing Magic of Tidying Up" concept of "spark of joy".