"Apes don't read PHILOSOPHY!"
"Yes they do Otto, they just don't UNDERSTAND it!"

For a few weeks I've been rolling the concept of "Amor Fati" -- a love of ones fate, the good and the bad -- around in my head, and been finding it comforting and energizing.

The thing is, I find its meaning a little difficult to describe to others, to put into words - and Melissa pointed out that's not a comfortable feeling for me. (Also, it's a little weird that its popularization comes in part of Nietzsche...)

"Amor Fati" is a complementary fit to other part of classical stoicism, with that philosophy's encouragement to divide events into those that you have control over and those that you don't. That's a good start for me, with my deeply embedded need to not let a situation go pear-shaped if I can be a martyr and "save" it. "Amor Fati" somehow completes that; not only can I recognize things are out of my control, but I can learn to embrace the circumstance in its entirety. (Embrace this circumstance, 'cause it's the only one you're gonna get!)

There's the obvious objection to loving the bad as well as the good... if you were really good at that, could you greet a stubbed toe or traffic jam or lost job with as much enthusiasm as a great movie or a raise? And so, without that general motivation to make things ("objectively") better for you or those around you, wouldn't you let things ("objectively") slip and get worse? I don't have a great counter to that, just an intuition that A. yeah, I don't think I'm likely to reach that kind of zen equanimity and B. accepting and loving that there will be more pleasant and less pleasant outcomes breaks through fears and anxieties about the latter, and those fears tend to be more stifling of positive action than tranquil, passive acceptance .

As with most of my attempts to find comforting philosophy, there can be a "first world problem" aspect to it, and I don't know how well it extends to truly trying circumstances. I do enjoy finding some parallels in other places though. At one point I learned the trick of recasting anxiety as excitement - physiologically their pretty similar - and "Amor Fati" helps with that, because you will love even the bad outcome you're nervous about. In the military, they talk about "embracing the suck" and even get a perverse pride in what they've muddled through. Finally, I guess "Amor Fati" is kind of a secular version of believers who find consolation in sad things as being part of "God's Will" - those believers tend to count on a divine plan that's ultimately for good in a way I can't, but I'm guessing it's a similar feeling in the meanwhile.

Anyway, I commisioned the designer Bnomio to recast this work on "Tempus Fugit" as "Amor Fati", and it's currently my iPhone wallpaper... (it will be my phone case when it's time for a new one.) Having this reminder literally at hand (combined with things I already like about the iPhone's PDA/organizing part of my life) is great, the phone becomes a worry stone... a non-worry stone. The ship may be foundering, our ultimate end has always been visible in the distance, time can tick away - but I love it. 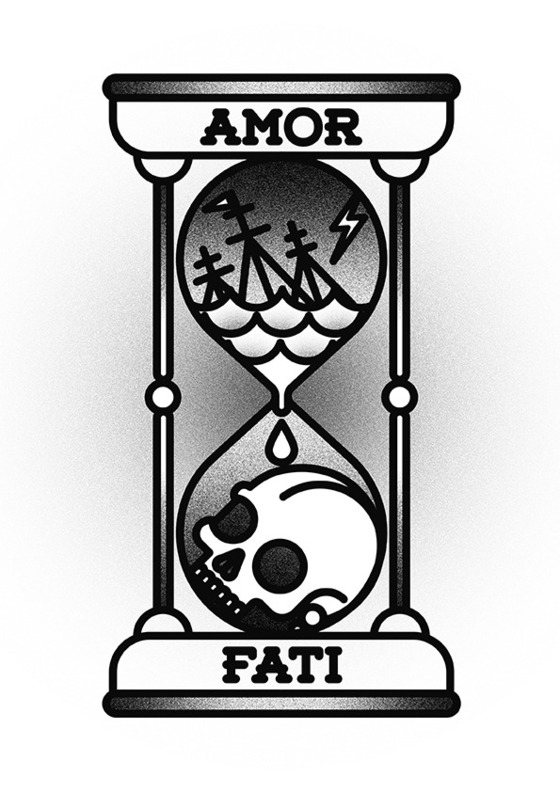 heh, two years ago I posted the perfect complement quote to today's essay:

There may be more beautiful times, but this one is ours.