tuba
My horn and its rain shadow... 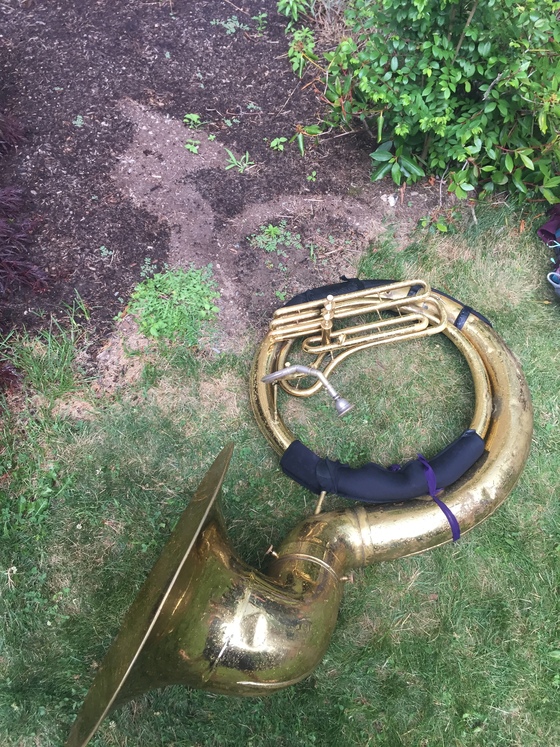 simplify.thatsh.it - dynamic, intriguing generation of extremely simplified abstract art from photos, I just read David Sedaris' Theft by Finding: Diaries (1977-2002). Made me realize how anemic my own journaling is... I don't put much effort into thinking of evocative scenes, it's more just to provide a footprint for the day.

That's the thing with a diary, though. In order to record your life, you sort of need to live it. Not at your desk, but beyond it. Out in the world where it's so beautiful and complex and painful that sometimes you just need to sit down and write about it.

I told Dad I was disappointed that I wouldn't be graduating in a cap and gown-- the Art Institute doesn't swing that way-- and he said, "I've got your old cap and gown from high school. Want me to bring them when we come up?" Then he said, "Do you think it will still fit?"

A person would be in pretty serious trouble if his graduation gown no longer fit. It's like outgrowing a tent, basically.

He predicts the emoji keyboard on November 4, 1987:

I saw a bumper sticker the other day that read I LOVE KILLING COMMUNISTS. The word love was replaced by a heart shape I'm guessing they'll put on the typewriter keyboard any day now, right beside the exclamation point.

"So I said to him, 'Well, money's not everything.' Then he said, 'Maybe not, but it's about ten thousand goddamn miles ahead of whatever it is that comes in second.'"

I got yelled at twice today, once when I was working as an entrance elf. The job amounts to hustling up visitors, and I thought I did a pretty good job. "Patronize Santa," I said. "Behold his chubby majesty. Santa was born and raised in a small home. Hail him. Santa's patience is beyond your comprehension. Come test it."
I'd been at it for ten minutes when a manager came by. Then he went and rounded up two other managers and the three of them brought me to the desk for a scolding.

I worked for Alba, who was sick, throwing up all day. At a party last night she had eleven Bellinis, those peach-and-Prosecco cocktails. These were followed by three tallboys. Yikes. You'd think an adult would know better: Beer on wine, you're fine. Wine on beer, stand clear. But eleven Prosecco cocktails should not precede anything, not even a twelfth.

I walked so long and hard in Paris the other day that my overgrown toenails rubbed against one another and started to bleed. Before leaving for the airport, I went to cut them and, finding no clippers, I used a pair of Colette's poultry shears. That is exactly why you don't want people staying in your apartment when you're not there, or even when you are, really.