the case for god

ramble
November 29, 2017
I'm reading a book, "Life, God, and Other Small Topics", transcriptions from a series of lectures with Q+A "Socrates in the The City". It's Catholic as all heck. I find intellectual Catholicism to have a richness there that I don't remember seeing in the protestant theological stuff I've read, and certainly it resonates more for me than the literalness that dogs much of the evangelical environment I grew up in.

Still, it's infuriating in parts, especially in how self-assured many of the speakers tend to be. Peter Kreeft's "Making Sense Out of Suffering" in particular (so far.) One of its central premises is that the strongest argument for atheism is the presence of suffering in the Universe. But that's only really a problem if you've taken as given that if there is a God, it's the simplistic all knowing / all loving / all powerful god of the Epicurus quote.

It was the huge plethora of religions that made my teenage self question the likelihood of any single one, and while a lot of faiths go for that all knowing/loving/powerful, there are a lot of potential ways of believing that don't. So Kreeft is branding all atheism as a disbelief in a very specific brand of divinity...

Over the years I've seen many more sophisticated ideas of God - the best historical context I've read comes from religious historian and former nun Karen Armstrong - seeing the Christian Trinity as an odd blend interesting mix of the unknowable "Sky God" (long worshipped by various peoples) with the more human and relatable gods that walked the earth.

The best attempt I read at making a myth of God-as-experimenter is "mr. g" by Alan Lightman - it does a good job to of showing how even an infinitely powerful and infinitely knowledgeable and deeply compassionate God might still make a universe with suffering as an unfortunate by-product (hint: mathematicians know that "infinity" comes in different magnitudes - say, the countable whole numbers and the uncountable set of fractions - both infinite, but there are plenty more of the latter)

I thought of all this because this SMBC comic had yet another sense of divinity: 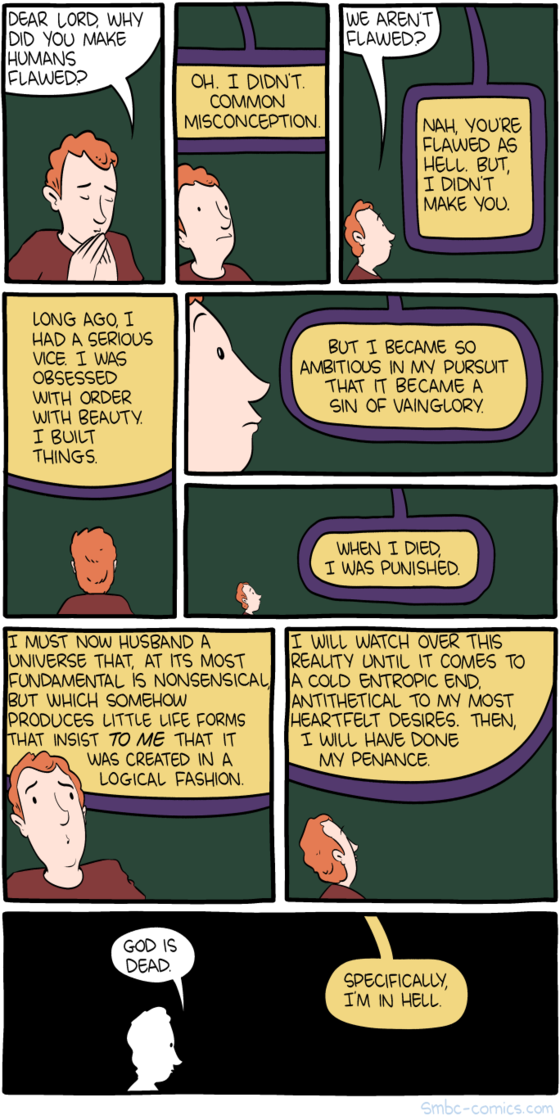 It really is the hubris of a singular religious faith - one that denies a "many path / many faces of God" interpretation as heresy - that bugs me. For you to be right, you are declaring many many many other people as wrong, and if I'm going to listen to that, you need to make your case without begging the question of what is true. And for me Peter Kreeft points out the hubris of the assumption that we're so important, that we matter so much as individuals, that of course we - each alone - command the specific attention of a divine being, and so the fact that our subjective suffering is allowed to exist becomes a difficult question that demands an answer. If you relax some of those me-centric assumptions, the question allows many more answers.

(Also I would argue that Peter Kreeft presents a facile idea of Buddhism - my understanding that while "suffering" is the most common translation of "dukkha", a more balanced translation would "unsatisfactoriness". When you push down the contrast dial, a lot more nuance is allowed to emerge.)

Ah well. My current audiobook is "The Brothers Karamazov" and I do have this Kreeft lecture to thank for that.