proud of my mom

historyfamily
July 15, 2018
Read this "Thought from the Shower" the other day and it startled me as being such an excellent point:

Sometimes, your parents just want to know you're just as proud of them as they are of you.

So, disconnected from any holiday or birthday, and know I'm to sure to miss or gloss over many admirable things my mom has done: I'm very proud of my mom.

As the nickname (bestowed early by her younger yet more worldly sister) "Betty the Good" suggests, she has led such a highly moraled and principled life, mostly obviously in the context of The Salvation Army.

I don't know that much about her early life, but some of it involves working her way through University with less financial aid than she deserved because her folks were shy of opening their finances to institutions. (And I know she made the decision to go to college rather than straight to The Salvation Army's "seminary", the School for Officer Training, on the advice of elders in the 'Army - a lesson in what it means to be a well-educated and informed person in the world)

And then she became a Salvation Army Officer! That's a life-long commitment, and a job that extends beyond the 9-to-5 - not to mentions insisting you give up deciding where you're going to live, and when you're going to move, and requires vast swaths of dedication to both God and your fellow Man.

Later my view switches to my partnership with my dad. Family lore is that achieving pregnancy took some effort, so obviously I'm grateful for that and proud of whatever persistence that took.

She and my dad had a neatly symmetrical relationship both in their ministry and in the domestic sphere, modeling a kind of feminism-friendly balance that has stuck with me even now. But even with assignments at some very challenging 'Army churches, she managed to find time for local musical theater, always a pleasure for her. And the way the two of them became fixtures in their communities - especially Salamanca - was striking.

Later, she displayed huge courage through my dad's illness and death. And then had the resiliency to go back to school for her master's degree, all while being a single mom. Of course, since I was such an angel in high school it wasn't quite enough challenge so through AFS she hosted *another* 18 year old boy, Marcos, through my senior year.

It was interesting that while I could beat my mom at almost any randomly selected Atari game, with the ones that caught her interest (Bugertime and Pengo come to mind) I couldn't touch her scores. A good lesson in focus and perseverance, there.

(Dang. There's so much past tense in this, it sounds like a eulogy! And it's not meant to sound that way - but it makes me think that the concept of singing someone's praises while they can still hear it shouldn't just be reserved for the elite getting "lifetime achievement" awards or whatnot.)

Back to The Salvation Army. While I think it's a great charitable and religious organization, living its Heart to God Hand to Man slogan (and, encouragingly, seems ahead of the curve on gender roles and racial equality) my mom's politics run reliably a bit to the left of its core, and I appreciate the grace she's shown in those circumstances - and how she's done that and learned to service in NYC, and London, and also many less glamorous places.

Or I think back to her helping me on move-in day at college, when my new hallmates flagged me over just say "Kirk, you know, we really love your mom!" That was typical. Mom seemed to love everyone and often the feeling was returned.

And so even now, my mom is at best able to achieve a semi-retirement, and is as continually active in church work as the regulations allow. I'm proud of that too! (Also, if it's not too impolite to point out, the success she and my aunt have had with sticking to their diet/eating/exercise programs is pretty amazing to see as well and I'm grateful 'cause it means they'll be around that much longer!)

I'm also proud of the room she has given me. I mean one thing I've learned is that parents generally try to avoid re-creating the problems they had with their own folks - and not to speak ill of my Nana, but I know she wasn't always the easiest to be with - exemplified by her application of the classic "look, you've got me so frustrated/worried that I've had to take up smoking again" guilt-trip.

So my mom made it her mission to steer clear of that kind of that kind of pitfall. And even when I shifted into being a bit more of a freethinker, where I went through the adolescent questioning of why on God's Green Earth where there so many religions, she was patient and kind through all of that and confident enough that my upbringing still taught me well and set me up to be safe and morally well-grounded.

Or the conversation we had once, when I confessed I felt, you know, guilty that my course wasn't one of being an uncle-figure and not a dad, and so not presenting her with a grandkid, her reassurance that yeah, while it was a bit of a bummer for her, it was also true that if I lacked the convictions to make family-making and dad-being that kind of number one goal and priority of my life, her strong preference was that I would have steered clear.

Anyway, so inspired on a random quote from social media, I just wanted to say all that.

(I also want to say I'm proud of my dad, but I've written about his achievements already - written when I was 28, on the day I was twice as old as I had been when he died. I'm also proud of my Aunt Susan, who is now the other "folk" I mean when I say I'm going to New Jersey to "be with my folks"... her journey in education from "Assistant to the Dean" to "Assistant Dean" is amazing.) 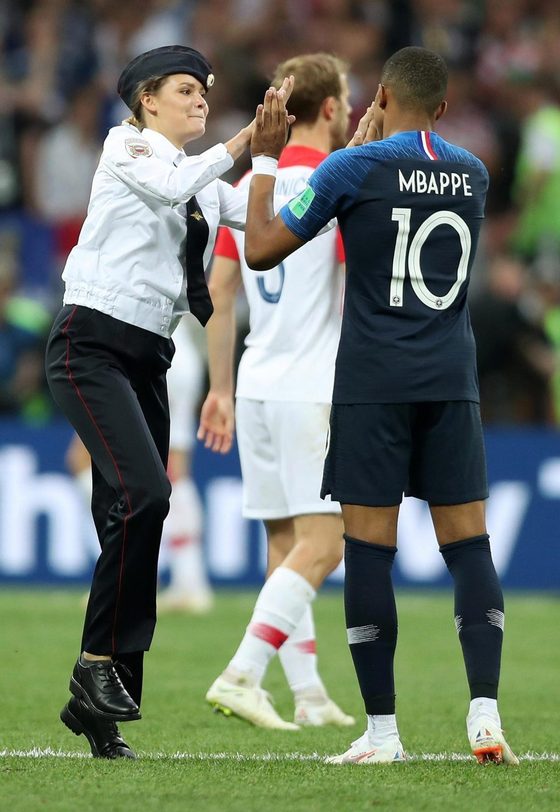 "French star Kylian Mbappe gives a member of Pussy Riot a high five" during a pitch invasion protest At work I'm surprised that everyone uses laptops, and many people use external monitors, but I'm an outlier for using the laptop keyboard and trackpad- it's a lot more common to use an external keyboard and then a mouse or "magic trackpad". I understand preferring a mouse, but a trackpad off to the side seems weird to me, at least once you're used to having the trackpad RIGHT there. I guess with external keyboards you don't have to worry about heat if the laptop is running hard, and if you're using the laptop as a second or third monitor you can prop it to a more ergonomically friendly spot, but I still love the arrangement of a laptop with a larger monitor above it, in part because it minimizes the difference from using the laptop in standalone mode.

Any thoughts? Any external keyboard/trackpad/mice users know some other advantage I'm not thinking of?