uncle bill and aunt susan at edinburgh from above 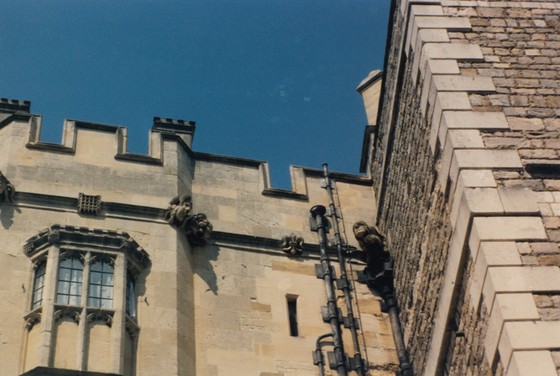 family reunion at the simlers summer 1995

mom getting snes for christmas

aunt susan and her christmas loot from elisabeth

veronika and shadows on beach

odd self portrait with veronika

veronika by wall near guggenheim

If you make things long enough, you will fail. That's important enough that I'm going to say it again, with emphasis. If you make things long enough, you will fail. The same thing that put you in the elevated place of being a creative artist in the first place will curdle or invert or fall on its face or on your face and you will be a person who made something that they should not have made. [...] David Bowie said something I really liked. I don't know if he said it often, but it's the kind of thing that you should get tattooed on your leg. He said that creativity is "one of the few human endeavors where you can crash your airplane and walk away from it."

I think it's a good example of being aware of catastrophizing - an individual effort fails, it's so easy to see that as an array of dominos to other creative efforts, to our self-worth, maybe even our ability to make a living and thus ensure our own physical security. But those situations, those kinds of slippery slopes, aren't that common, and usually we can find some place to get traction - that is if the initial failure is even that big to begin with. Which it usually isn't - that's where the ability to cast a "So What" field comes in handy. This effort failed. So what? So I feel like I'm less good of a creator. So what?

Another quote from the book that I liked the sound of:

There was no such thing as distraction. There was only traction.