sounds to me like someone's got a case of the s'pose'das! 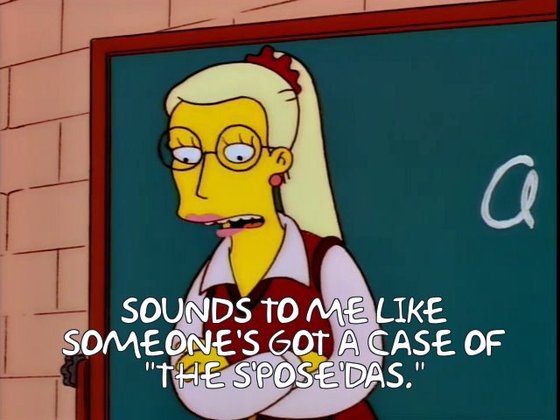 Been thinking about this famous Simpsons line in the context of how I'm noticing everyone is very quick to use emotional judging to get to a stance of "this is good and I'm for it" "this is bad and I'm against it" rather than more finessed categorization; for understanding that everything exists because of some kind of set of cause and effect, and usually meeting some kind of purpose, but maybe a purpose that doesn't align with our own. (I think this "emotional judging" goes against Buddhism's suggestion that we not attach so freely, lest it lead to suffering.)

I mean, that's what a "s'pose'da" is, right? "This should not be!" and yet - there it is. From whence "should"? Going to "how it should be" can be used to deny personal responsibility for preference... I mean you can often trace it back to a lot of "well, we should make choices now to make outcomes like this less likely in the future, preferring rather a common-sense-derived set of preferred outcomes", but most people just go with their gut and-or defer to authority of one kind or another.

Anyway, is the line this teacher is using one (or similar to one) teachers actually used, or was it kind of made up for the show? Sigh, in the interest of fairness- damn it to hell, NJ Dems, don't gerrymander too, you jerks. Cracked has some thought experiments, mostly old stuff but some kind of new. I think how some of them - especially "which has more value, water or a diamond, when only the former is essential for life" and "would you ruin a $50 pair of shoes to plunge and save a drowning kid, but not send $50 to a foreign kid-saving charity?" only make any kind of sense if you throw away context. In most contexts, a diamond will gets you lots of water. In context, a drowning child is a problem at hand with a finite and bounded and satisfying solution, while sending a check involves chipping on a corner at a huge problem without resolution.

Noticing that brings me to this idea of how I'm a "cruxian", that I care about things in broad strokes and am relatively insensitive to nuance - basically, my brain is much more attentive to how things interact with their context. I'm blind to things like the mostly-internal excellence of a well-constructed symphony, say... not to mention a bit faceblind, maybe since the specific contours of any given face don't change how it interacts with the world (unless the personal is at the far ends of the beautiful/ugly spectrums)