April 10, 2019
Last December I bought myself a Christmas gift, a lovely 65" Samsung NU8000 television. (I miss my old projector, but given my space, this is the smallest size that still feels like a billboard, and Wirecutter likes the low-lag mode of these for videogames)

Overall its UI is pretty grand - much better than the older Samsung my mom has - all the apps are easy to get to and most are of good quality, and the shortcuts from the main screen generally make sense (and I'm not TOO worried about the data collection I'm sure this beast is running on me.) But the onscreen keyboard they use for some of their setup/config is THE #&$#(*$@& WORST, especially for entering a password.

It's kind of a standard "use the cursor up/down/left/right, select the letters via an onscreen keyboard" (laid out like a normal typing keyboard) that video game console owners have put up with for a decade BUT -- 8 letters or so into typing a minium-length-8-character password, say -- once you select a letter, the space immediately to the left of the character you just typed becomes a checkbox, a short cut to "I'm all done".... so if you're bopping along, trying to efficiently enter your password, and it starts with "ireallyreally" in it... you enter the r of second really, that's the eighth character - meaning you've meant the minimal wifi password length, so then when you go to move the cursor to the left, you're not over the "e", you're about to select the "I'm all done" checkbox.

And you hit the center of the button thinking you're on the e, and the thing thinks you're done, and takes away the screen to try out your (of course incomplete) password, and you have no idea what is going on, but you're on a totally different screen entirely, and you don't know what the hell happened, so then maybe you repeat this dance two or three times, because it's such #$#(*@ STUPID HALF-BAKED DUMB@#$#@ INCOMPETENCE in trying to make a "helpful" - yet fundamentally unpredictable -User Interface

A core of "Tao of Programming" is the "Law of Least Astonishment", i.e. a program should always do that which surprises the user least - and this is a FLAGRANT violation of that very simple principle.

Of course, even once the user has overcome the surprise of a barely-useful shortcut showing up where there wasn't one before, to REMOVE the "helpful" checkbox you simply go select another letter and the checkbox goes away- but it comes back, so for the rest of the text entry if the next letter you wish to type happens to be to the left of the one you just entered, you have to wiggle the cursor around to shake off the dang uselessly premature checkbox.

Programmers. They need to learn the difference between "can" and "should"

(Mercifully, the searches on the various apps like Netflix and Amazon Prime implement their own keyboards, free of this half-baked-crap.) Yesterday was a weirdly bad, Mercury-in-retrograde technology kind of day - sometimes by fate, sometimes by design - dev servers that were oddly recalcitrant, gnarly technological problems from labyrinthine code bases, laptops needing rebooting, phones needing rebooting, earbuds needing rebooting... and a TV that dropped its wifi connection (set months ago) and wouldn't regain it (even after I successfully wrestled its idiosyncratically terrible UI "helpfulnes" I rant about above) and I had to resort to an ethernet cable.

It's the kind of day that makes me glad I don't need a pacemaker! As I go through and groom old blog entries and see just how many broken links predominate, how the old geek vision that "urls can be forever" is almost completely unrealized, but sometimes I can use a search engine to find a replacement for a yanked Youtube video, I realize that one purpose of Google is weeding out the underbrush of fallen sites, if search wasn't a constantly renewed process and we relied on old archives we'd be choked in a forest of dead wood. Things I came darn near to forgetting: once upon a time I had and enjoyed this LCD game: 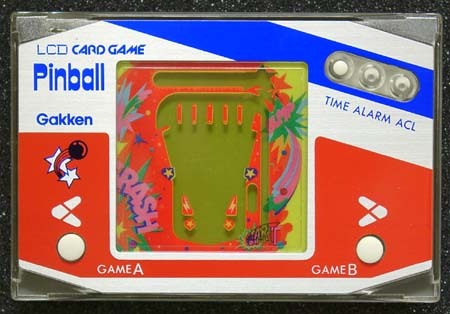 Success is never final; failure is never fatal. It's courage that counts.