One other line from "Fear of Flying" has stuck in my head, and that's Adrian saying "Courage is the first principle" as he cajoles Isadora into running away with him. [...] I think he might be citing Aristotle, actually, the quote sometimes given as "Courage is the first of human qualities because it is the quality which guarantees the others."

This idea has been stuck in my mind today, and I was reading some summaries of the Aristotelian roots.

I have friends and loved ones afflicted with industrial grade anxiety, and it's so hard for them to deal with. And so often I have my own troubles with courage, this fear of proving less capable than I need myself to be resulting in a lack of productivity and a plethora of avoidance behaviors.

Some of the difficulty comes from the way we use emotions to think with. I'm not sure if it's even physically possible to spur ourselves into any action without some level of emotional energy - but we overdo it. It's so, so hard to find that space between "this doesn't matter, nothing matters, who cares" and "this is so important, if it doesn't go well things will be just awful - awful!"

My best suggestion is to try to encourage the stance of "Everything matters, but nothing matters that much".

(I acknowledge there's the "first world" vibe to this problem, privilege involved in having a place in the world that seems fundamentally comfortable and stable - but I also know every person tends to have a hedonistic setpoint, that people from a really wide variety of circumstances end up able to adapt and end up with a similar level of subjective contentment whatever their external circumstance.) "We here at Weyland-Yutani Corporation would like to wish a happy Pride Month to all of our LGBT colonists on LV-426." 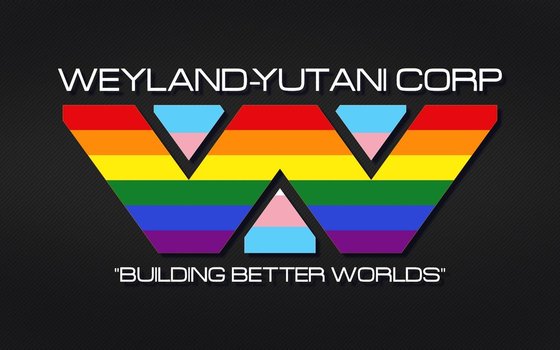 via While looking up the design, I found this site: https://speculativeidentities.com/ - lovely deep dives into the typography and logo design of future companies.