from Annaka Harris' "Conscious: A Brief Guide to the Fundamental Mystery of the Mind"

ramble
July 19, 2019
Harris' book is a pretty decent survey over research into the problem of consciousness, and she cites some fascinating research... often pointing out how our (mis)conceptions of the world radically distort our view of some otherwise promising theories.

[Neuroscientist Anil] Seth refers to our experiences of ourselves in the world as a kind of “controlled hallucination.” He describes the brain as a “prediction engine” and explains that “what we perceive is its best guess of what’s out there in the world.” In a sense, he says, “we predict ourselves into existence.”

We make a map (our experience) of the territory (reality) and it is damnably easy to mistake the map for the territory.

She then talks about some of my favorite bits of mind-blowing research:

The split-brain literature contains many examples suggesting that two conscious points of view can reside in a single brain. Most of them also topple the typical notion of free will, by exposing a phenomenon generated by the left hemisphere that Gazzaniga and his colleague Joseph LeDoux dubbed “the interpreter.” This phenomenon occurs when the right hemisphere takes action based on information it has access to that the left hemisphere doesn’t, and the left hemisphere then gives an instantaneous and false explanation for the split-brain subject’s behavior. For example, when the right hemisphere is given the instruction “Take a walk” in an experiment, the subject will stand up and begin walking. But when asked why he’s leaving the room, he will give an explanation such as, “Oh, I need to get a drink.” His left hemisphere, the one responsible for speech, is unaware of the command the right side received, and we have every reason to think that he does in fact believe his thirst was the reason he got up and began walking. As in the example in which experimenters were able to cause a feeling of will in subjects who in actuality were not in control of their own actions, the phenomenon of “the interpreter” is further confirmation that the feeling we have of executing consciously willed actions, at least in some instances, is sheer illusion.

There's so much thought talking trying to describe this phenomenon of our other selves - elephant and rider, id/ego, inner-child - it makes me think there's something to it. I am convinced that our physical brains (and the nervous system of the rest of our bodies) are the medium for multiple entities - deeply connected, but still with their own agenda and independent point of view. (I'm not sure if that split is strictly hemisphere-based or not, or how much it might vary from person to person.)

For most people it's the narrative self, the inner voice, that is the most "us" - the part of our brain that uses its unfair advantage of language, the scaffolding to build magnificent structures of thought, and a habit of justifying the whole's actions to others - and to ourselves - to claim to be the true us. It plays at being the competent Dr Jekyll to the rest of the brain's Mr Hyde.

To navel-gaze a bit: I wonder if this distinction, this dual-life, might be especially heightened in me, personally, relative to most people. Evidence for thinking I'm such a weird dual snowflake follows:

When I read, I read fast, which means I skim - I've come to realize it's like a whole level of my brain absorbing the words from a page or screen and then efficiently summarizing the content to a higher level of awareness. This silent, speedy skimmer system has shown to be so serendipitous for me on standardized tests... and it leads me to think of myself as a truly "deeply superficial" person.

(Furthermore, this voiceless low level reader system is mostly attuned to seeing how systems interact... and so the internal essence or superficial aspects that don't really change how the object of the reading material interact don't even get reported to the higher brain! This is coupled with my theory about why I'm somewhat faceblind - the details of a face just aren't that important to me, because they don't change how I'll interact with it...so at the higher levels I don't even see those details. I am terrible at spelling for similar reasons - twisty little vowel combinations don't change how the word sounds much, so they are devilishly hard for me to remember to write correctly.)

The other part of this silent system is - my inner child as shown by my "inner snacker" - is especially difficult to control. It's a bit embarrassing really. I mean I know willpower in terms of food is tough for many people, but when I observe how I will chow down on snacks at work - if there's like an array of cookies, it seems like I will not be sated until I have sampled one of each. And I haven't witnessed quite the same level of that with other people. I'm not as much an outlier here as I am with the skimming/reading thing, but I think I am on the far side of this bellcurve as well.

But, countering what I think might be a particularly active subconscious - my religious upbringing has left me - the inner-voice me - hyper-vigilant about keeping myself in accord with How Things Should Be. An early fear of eternal damnation and hellfire kind has constructed a system of rational vigilance, a gardener of the emotional garden. Almost every sprout of a feeling is inspected, and if found to not be rationally justifiable, it's plucked from the soil before it has a chance to grow. With lust, my physiological response is repressed unless my narrative self is convinced it's a safe and reasonable thing. I'm not even sure I love like other people seem to - I admire like hell, but I haven't had a "Crazy in Love" feeling in a long, long time. (My theory is, though, people search for that crazy in love feeling especially in the early days of relationships, because it puts the feeling out of the reach of market forces, that irrational love will better weather the travails of life and stress and aging and not be on the hunt for any better offers.)

And I think the two systems of me have warped each other a bit, goaded each other on. Like, my inner snacker is super quick in driving me to grab a tasty food on impulse, because that silent system knows that the inner voice nanny is on patrol.

If this two-entity model of myself is correct - it's a little scary. My narrator self - which is in many ways dominant, which is writing this rambling essay - is worried that my silent self may become sullen and resentful and uncooperative. In fact, when I think about my skullslinkies incident, where in a alternate mind state I had a clear picture of my those inner, short-lived thought processes, clear of the influence of the narrator self and finally able to express some of their resentments...I'm further driven to try to find ways to get my parts to be content and in harmony. And it feels like if I ever have some kind of psychotic break, this divide might be where the fault line lies.... or at least I think that I will never be as well-integrated as most people.

Harris takes a lot of time defending panpsychism - the concept that consciousness sorta exists in almost every system, even simple ones - maybe even clusters of atoms. While "everything is conscious, sorta!" can sound like new age woo-woo, or a kind of Western shintoism, she defends it - not that she's fully convinced about it, but it isn't as nutty an idea as it might seem. A thermostat has a kind of awareness of the world around it, albeit just the ambient temperature. Personally I am comfortable with thinking of the thermostats inner state as the tiniest glimmer of consciousness. I think full consciousness involves having a rich model of the world and of the self as an actor within that model, and if you have a system with those characteristics, you probably have consciousness...

Finally, Harris reminds me of some of the absolute, batshit weirdness of the implications of the double-slit photon experiment - how light is a wave or particle depending on if it's being observed (meaning observation - which might be inexorably deeply linked to a concept of consciousness - might be a weirdly causal part of reality) and not only that, but a 2007 experiment confirmed John Wheeler's prediction that that effect seems to go backwards in time. At trivial scales of time, or unimaginably vast ones:

You can now ask, for each photon that comes to me, whether it came from the left [or the right] side of the gravitational lens. [Let’s say] I decide to measure which side it came from, and I find out that it went on the left side. That means I can say that for the last ten billion years, that photon has been on a path that started from the quasar and went around the left side of the gravitational lens. But if, instead, I had chosen not to make that measurement and just measure the interference pattern, it would not be true that for the last ten billion years that photon had gone [down a path] around the left side. So the choice I make today determines the ten-billion-year-history of that photon. 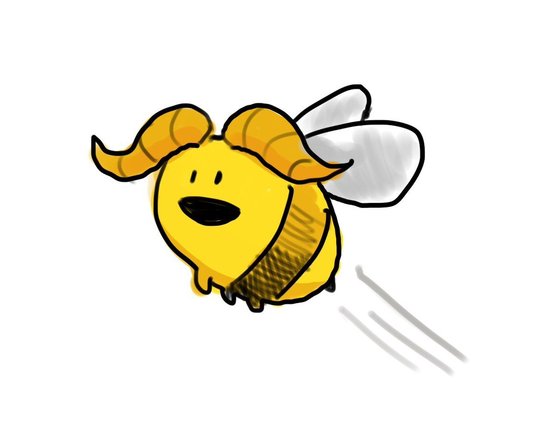 I had to draw a wildebee