In a nutshell, he's saying that the "10,000 hours" rule is over applied - it talks about the people at the tiptop of a specialty, pressing on to an elite place way out on the learning curve. Kaufman argues how 20 hours is often enough for a solid amount of competence.

It's a great point! Reminds me of Jake the Dog: 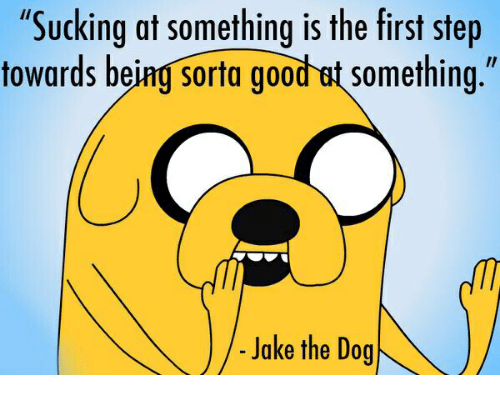 But those 20 hours are not a walk in the park. Kaufman ends with the slide:


The major barrier to skill
acquisition isn't
intellectual...
it's emotional.

And then he says

Especially for people with Fixed Mindset - folks so skilled at finding low hanging fruit of stuff that are variants on what they're already good at, and so much in the habit of moving on and considering the difficult task unimportant - those 20 hours are going to be a slog! And 20 hours is a longer time than might first appear, especially if you're setting aside big swaths of dedicated focused and thoughtful practice... You might want to cmd-+ or ctrl-+ your way to zooming this to 200% to take it in, but a Magic Eye of Bob "Church of the SubGenius" Dobbs in ASCII is pretty amazing....
So near the 50th anniversary of the moon landing, lets not forget the software engineer who made it possible - she has some lessons for the coders of today


You know how you can make America great again? Tell Donald Trump to go to hell. [...] He's a race-baiting, xenophobic, religious bigot.

Back in the day you could get something called "Weslyan Tetris" for Macs... it had really annoying sound clips that would comment on your performance, and then sometimes it would "nyah nyah nyah" and cheat...

As soon as we started programming, we found to our surprise that it wasn't as easy to get programs right as we had thought. Debugging had to be discovered. I can remember the exact instant when I realized that a large part of my life from then on was going to be spent in finding mistakes in my own programs.