December 27, 2019
"Quinton Reviews" made an amazing discovery - "Gnorm the Gnat" wasn't the only predecessor to "Garfield" - there was a first run called "Jon" that used a lot of the same gags... here's what Garfield looked like: 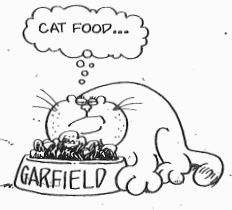 You can see the newspaper pages here or here's a video giving the background:
It Was a Total Lack of Planning That Killed Star Wars -
Some spoilers for the new movie, but overall a measured amount of criticism about the see-saw we got, with the first sequel being a bit of a slavish copy of A New Hope, the second sequel being a rebut of that approach, and the third going back to squash the second. (and honestly kind of just remaking Return of the Jedi) Honestly I wish we had taken that second movie approach from the outset, but putting the whole series under one vision would have been a less whiplash-y trip.