January 26, 2020
Had a monster theme playing with Cora yesterday... made another little p5 toy (not really interactive though come to think of it) 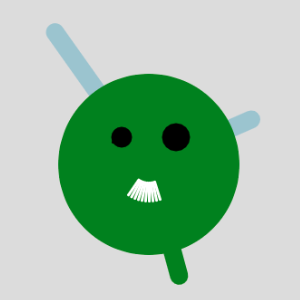 coramonster1
Plus some of Cora's original creation monsters:


This was all after I found out that Cora was surprisingly good at a restaurant-waiting game I'd only previously played with grownups: "Mr. Snowman". On a restaurant placemat w/ crayons (or a napkin w/ a pen, whatever) one person draws a Snowman. The next person goes on offense and draws a threat that may lead to the Snowman's demise. The first person (or the next person on the defense team) draws a way of thwarting the attack. The next person then draws something to undo the defense or perhaps launches a different line of attack.

Cora was good at the problem solving aspect of this! Water to put out a nearby melting fire, an umbrella to ward off a monkey with water balloons, a wall to stop an oncoming car (or maybe just removing the tires...), unplugging the loud music, bug spray to stop an annoying mosquito, etc. I figured out pretty quick for the kids version, the offense can be annoyances rather than existential threats, and launching new attacks is probably kinder than undoing the defense the kid just put down. (Also with Chas' help the second sheet became helping defend the women of the renovation show Good Bones ("Two Chicks and a Hammer")... not quite sure how that happened but I rolled with it.)

Reasoning will never make a Man correct an ill Opinion, which by Reasoning he never acquired

But I keep arguing anyway, in part to increase my own understanding of views I don't share and in order to try and persuade the other party that people who disagree with them aren't irrational idiots.

The thief who took the moon moved it to Paris.