on not getting swamped 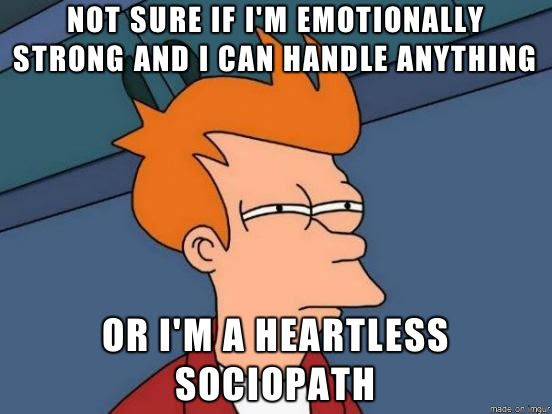 The core issue of it still sort of remains for me. I mean I *feel* things, but mostly anxiety and what not, and I cultivate sympathy and empathy for loved ones especially when they get knocked over by a wave of fear, but lately I'm even more aware of this philosophical safe space of emptiness I have, that my feelings and preferences don't matter much from the objective potential God's Eye View that I am forever subservient to, so I might as buck up and give the world a sardonic grin and get ready to roll with it.

To accept that it's not morally wrong to not get swamped by feeling is tough - whether it's fear of viruses and being part of a chain of infecting the vulnerable as well as myself, or concern for an economic future that suddenly has many more questions than answers (and the answers we have are all pretty bad), or of outrage that might lead me to be more politically active.

Via the Hidden Brain podcast The Cowboy Philosopher Y'know, I really had high hopes for 2020. Usually even numbered years have a good vibe for me. So a question about R0, how many people an infected person gives it to, on average... a few places I've seen them run the exponential math that results:

Now, I don't want to underplay it- viral spread is exponential, and this explosive growth is fundamentally true. And if seeing these exact numbers helps someone get the message, and do the right thing, and stay the hell home for a while, good.

But... does R0 assume 3 new cases, of people who otherwise wouldn't be infected? At some point - maybe sooner maybe later - the contact is with people who were going to catch it anyway. Exponential growth eventually ends. (Just like: "All Bleeding Eventually Stops")

So the math geek in me is irked or at least questioning, but I don't want that "skepticism" to detract from the fundamental correctness and truth and Truth of the issues at hand...

Under current guidelines one's milkshake is only permitted to bring nine boys to the yard.