laptop
I just got a new laptop. Ordered a month ago, given the new uncertainty in my economic circumstances, the timing wasn't ideal, maybe - but at least I know I have a machine that would see me through a "Bring Your Own Device" workplace. (Also good to have a usable backup machine at hand, tbh.)

Anyway, new machine = time to bust out the stickers! Clockwise from bottom left, my old laptop, the cases of two work machines, and my new one, the MonkBook Air. 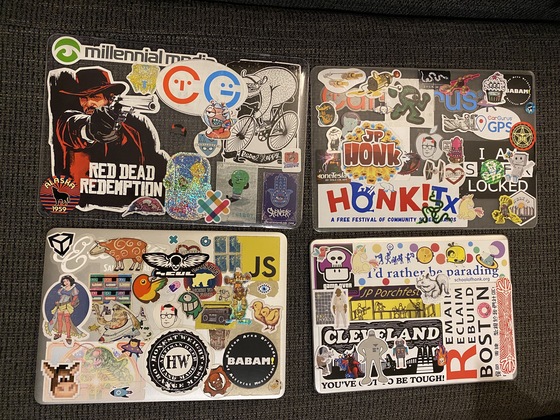 I like sticker'd computers. They make it easy to tell one from another, for starters, and I dig the aesthetic, and what I think it says about me. (Not entirely complimentary things for every audience, I'm sure.) Also, I hope it makes a computer look less worthy of stealing...

I kind of wussed out, and the MonkBook has its stickers on a case. I decided I wanted a wall-to-wall, no whitespace, but i also ended up using a selection of stickers consistently nearer and dearer to my heart than ever - Cleveland ("You've Got To Be Tough!"), School of Honk ("I'd Rather Be Parading"), JP Porchfest, Boston ("Remain, Reclaim, Rebuild") - and I didn't want to obscure their messages, so I had to be careful with the additional layers.

Arguably, I have too many stickers... 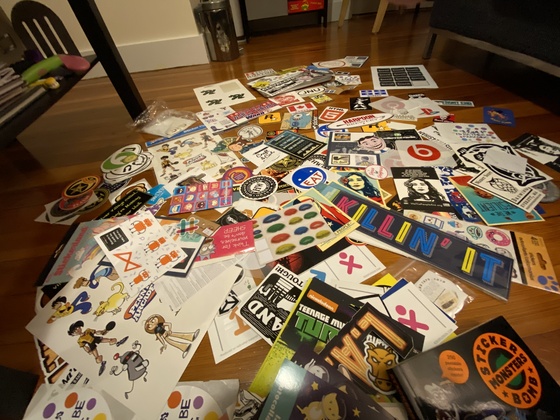 Trump, who has met Kim in person three times and crossed the Korean Demilitarized Zone alongside the young dictator last summer, said they had developed strong ties.
"I've had a very good relationship with him," Trump said.
Trump has previously described "falling in love" with Kim and exchanging glowing letters that underscored their unusual relationship.
He said last week he received a "nice note" from Kim recently.
"I think we're doing fine," Trump said at the time.
Later, Pyongyang denied that Kim had recently sent Trump a letter and accused him of evoking the personal relationship for "selfish purposes."

What an odd, summer-camp-romance sounding thing.

(As the Putin character in The Capitol Steps put it:
"......very romantic") Saving Your Health, One Mask at a Time - really good, common sense advice.

Masks and maybe even gloves are important for stores. But it's not too hard to make your house and even your car a reasonably safe and more relaxed sanctuary. Your risks will never be zero, but you can bring them down to the point of livability.

(Caveat: the article doesn't mention it but once someone has it in your home, things are clearly much rougher.) 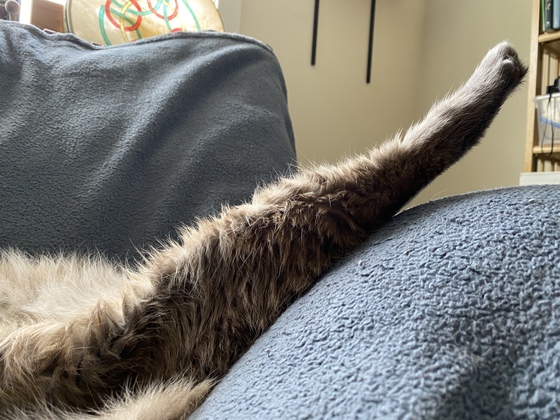 Happy Earth Day, here's a piece by an old mentor of mine...

Sophisticated new research links Hannity's coronavirus misinformation to "a greater number of Covid-19 cases and deaths." Take it with a small grain of salt but I think they're doing their statistical due diligence: FOX viewers who watched Sean Hannity who was blase and not talking much on Coronavirus in February made less cautious decisions, got sick, and died more often than FOX viewers who watched Tucker Carlson, who sounded the alarm more consistently.

What people watch matters. The further you get from reputable sources - sources who base their reputation more on being correct and fact-checkable most of the vs being in good political alignment most of the time - the more dangerous and unreliable your information is.

(that said, I recognize Vox has a political lean - but from what I hear about the paper, it seems legit.) Alright, you probably knew this was coming... in the words of Hothead Paisan: Homicidal Lesbian Terrorist - Playin' the Cello: 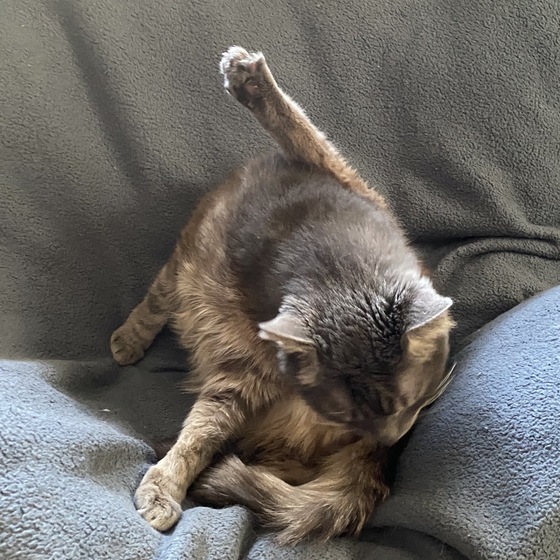 Good kitty self-care isn't always pretty, but it can be kind of funny!