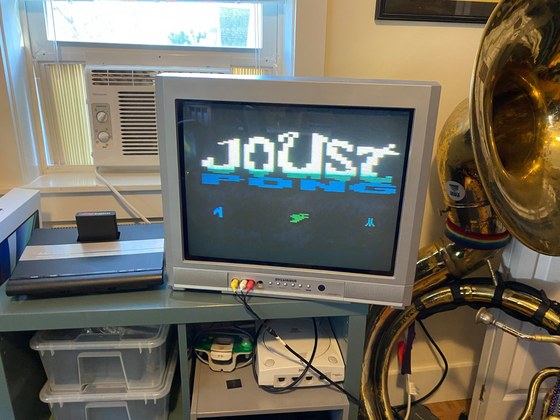 Recently walking with a friend I found a Sylvania 20" TV ("6420FE") waiting for trash pickup - I had been thinking of looking on FB Marketplace for a CRT TV for my Atari 2600...

Its excellent picture kind of revitalized my interest in the Atari. I had a Harmony Cartridge that lets you put as many ROMs as you want on an SD card and play them on the Atari, and nostalgia led me to recreate the collection of games I grew up with.

(My parents managed to get a lot of closeout games during the crash (a lot of overstock was being dumped to their Salvation Army employers) so I had a relatively huge collection, and that was my main system even as it all became pretty "retro")

I went through Wikipedia's List of Atari 2600 Games (Oh, look, technically I am on Wikipedia, via my homebrew JoustPong! Just not enough to have my own page yet, sigh) and assembled the list of games I had - amazing how easy it was to do that by memory, these games have really stuck with me.

I angtsted for a bit on how to sort the games on the cart - no one wants to scroll through a list of ~120 titles - and realized "by publisher" was what made the most sense - that's how I would organize them with physical carts (many of which I still have!) since each manufacturer had a distinct look and feel.

Finally, I decided to complete the nostalgia trip by thinking on what games from this pile really mattered to me, and why:

SIGNIFICANT TO MY STORY GAMES

IMPRESSIVE GAMES GAMES OR WITH SOME DETAIL I LOVED GAMES I PLAYED A LOT OF IN COLLEGE GAMES MY MOM GOT GOOD AT REALLY GOOD HEAD TO HEAD GAMES GAMES I JUST REMEMBER PLAYING A LOT OF Last night some friends and I had a Zoom/NetflixParty to watch Michelle Obama's "Becoming" - it talked about her father - a man who never had opportunities to equal his intellect - and who was a lover of Jazz. Last night I line in a dream, something like "Most Jazz is like a 747, it will fly you there ok, but Bebop is like one of those F-17 Fighter Jets..."