The Warrior of Light and Strategy

A sword can last a short time, but the warrior has to last a long time. That is why he must not let himself be fooled by his own capacity and so be taken by surprise. To each thing he gives the true value that it deserves.

Often, when he is faced with serious matters, the devil whispers in his ear: "Do not bother about that, that's not serious."

Other times, when he is faced with trivial matters, the devil whispers: "You need to spend all your energy on solving this situation."

The warrior does not listen to what the devil is saying. He is the master of his sword.

Pay attention to your allies

A warrior does not associate with anyone who wishes him harm. Nor is he seen in the company of those who want to "console" him.

He avoids whoever is only at his side in moments of defeat. These false friends want to prove that weakness has its rewards. They always bear bad news. They always try to destroy the warrior's trust, under the disguise of "solidarity".

When they see him injured they break into tears, but deep in their hearts they are happy because the warrior has lost a battle. They fail to understand that this is a part of combat.

A warrior's true companions are at his side at each and every moment, in times both difficult and easy.

Negotiating with the enemy

When the moment of combat draws near, the Warrior of Light is prepared for any circumstance. He analyzes each possibility and asks himself: "What would I do if I had to fight against myself?"

This is how he discovers his weak points.

At this moment the adversary approaches, carrying a bag filled with promises, agreements and negotiations. He has tempting proposals and easy alternatives to offer.

The warrior analyzes each of these proposals; he also seeks an agreement, but without losing his dignity. If he avoids combat, it is not because he was seduced – but rather because he decided that this was the best strategy.

A Warrior of Light does not accept presents from the enemy.

On the defense and on the attack

The warrior is careful with people who think they can control the world, determine their own steps, and are certain that they know the right path. They are always so confident in their own capacity of decision that they do not realize the irony with which fate writes everyone's life.

The Warrior of Light has dreams. His dreams carry him forward. But he never commits the mistake of thinking that the road is easy and the door wide.

He knows that the Universe works like alchemy: solve et coagula, say the masters. "Concentrate and disperse your energy according to the situation."

In the face of defeat

The Warrior of Light knows how to lose. He does not hold defeat as something indifferent, using phrases like "well, it wasn't all that important", or "to tell the truth, I did not really want that".

He accepts defeat as a defeat; he does not try to change it into a victory or an experience. He suffers the pain of his wounds, the indifference of his friends and the loneliness of loss. At such moments he says to himself: "I fought for something, and I failed to get it. I lost the first battle."

This phrase will give him strength. He is aware that nobody wins all the time – but the courageous always win in the end.

I hunted this down via a tattoo "Existem momentos de agir, e momentos de aceitar", on a tattoo in this article on Survivors of human trafficking becoming coders Unused concept art for the Atari 2600 game Breakout. Between the beefcake and the rainbow colors of the game it's kind of perfect for Pride Month! 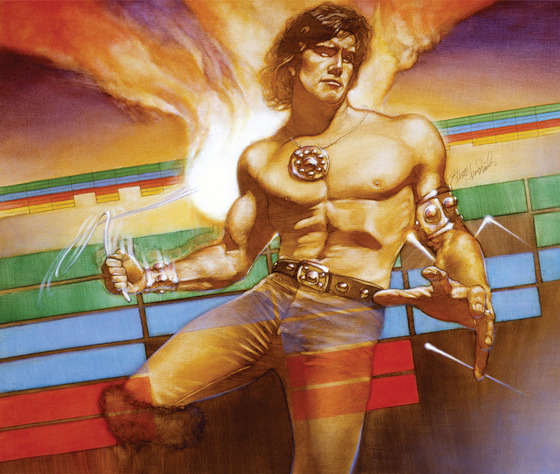