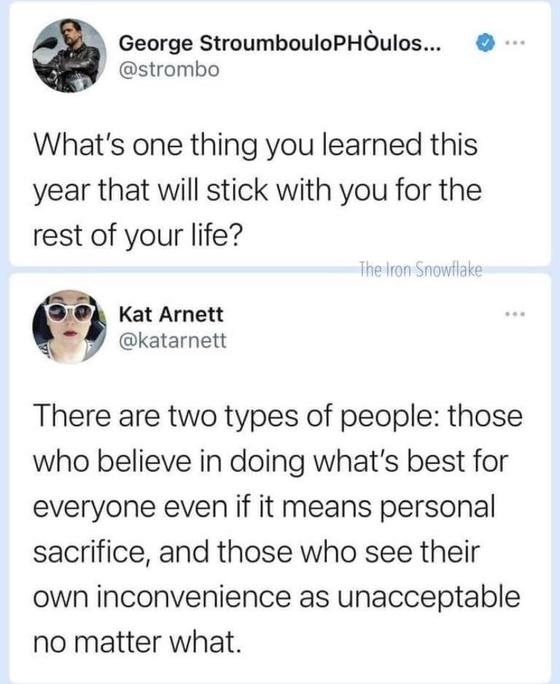 Man! I think there's something to this.

For me, value is an emergent property of groups. (Could even be a group like a couple.) We can - and must - still attend to our personal needs, and if a group is consistently ignoring our personal needs, we gotta bail! But I think evaluating everything by what's the most good for the most people - with us as one of those people - is a more moral way to be. Related:

I've reached the halfway point of Iain McGilchrist's "The Master and His Emissary: The Divided Brain and the Making of the Western World" where he pivots from the physiological to the cultural. The duality he focuses on (left hemisphere / rationalized / focused on what we want the world to be VS right hemisphere / intuitive / focused on what the world is) has a lot of names and manifestations: Nietzsche said Apollonian vs Dionysian, Zen and the Art of Motorcycle Maintenance said the Classical way of knowing vs the Romantic (nice summary here.)

As always I'm distrustful of "intuitive" side. (Come to think of it, "I don't think my gut feelings are particularly trustworthy" is one of the earliest self-reflective tropes I remember making.) I think it's too easy to romanticize the intuitive - like I understand that our subconscious has a wisdom that the cleverness of the merely rational side lacks - the intuitive self has a viewpoint that is bigger and slower to form - but it's a product of its environment just like everything else is, and it doesn't have a special mainline connection to the Truth.

So combining that tweet dialog with "divided brain" thinking: siding with the "rational" brain, despite its emotional immaturity (frustration and willingness to confabulate when things "don't add up") is a form of radical, wide-ranging empathy. The rational brain is more about the exteriority - the surfaces where we connect - than our own murkier interiorities. It says the most important reality - the best place to draw our values from - is consensus reality. Rationality has error-correcting mechanisms and - in theory - the rationalistic brain is better posed to take other viewpoints into account (even though it also seems more likely to throw temper tantrums when its assumptions and desire to control the world are being challenged! Recognizing the source of that anger is a newer insight for me)

This brings me to my second point. Democracy demands that the religiously motivated translate their concerns into universal, rather than religion-specific, values. It requires that their proposals be subject to argument, and amenable to reason. I may be opposed to abortion for religious reasons, but if I seek to pass a law banning the practice, I cannot simply point to the teachings of my church or evoke God's will. I have to explain why abortion violates some principle that is accessible to people of all faiths, including those with no faith at all.

That "subject to argument, and amenable to reason" is a line that has stuck with me. I think it should apply to both ideas that spring from religious belief and that spring from personal intuition.