business cards a recruitment for tootment

tuba
September 17, 2021
New personal cards! I decided to lean into how like 90% of why I hand them out is tuba related, and even did a QR code link to kirk.is/bands which might simplify my shpiel to people who might want to start playing in one of the groups I'm in. 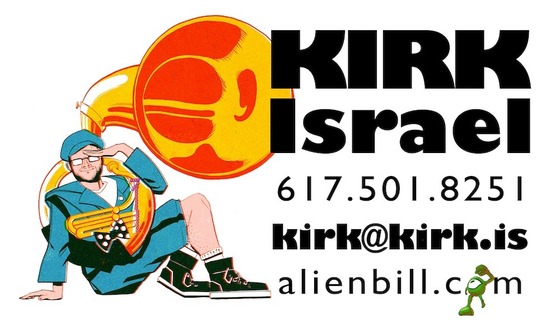 Based on the bottom photo here which remains one of my favorites though it's not a look I go for very often now. In retrospect i should have touched up Alien Bill's pupil to make it bigger. While most of my tuba playing is for community and activist bands, I play with a few others that pay. Not a ton, mostly I'm in it for the community more than the cash - but when I am helping them scrounge for tuba players for a gig I can't help them with, I think about this quote from a 2012 TIME article on a rash of tuba thefts from SoCal schools:

The New York Times reports that teachers are pointing to the popularity of banda, a traditional Mexican music form, in which tubas serve as the anchor. Tuba players in these bands are paid sometimes double what the other banda musicians play, and Chaves-Rasas says she's had students come to her asking to learn tuba so they can be in a banda, adding, "people will pay top dollar for a banda with a sousaphone player."

I don't want to deprecate the other horn players (most of whom, frankly, are likely to be more skillful players than me) nor the percussionists, some of whom are carrying around as heavy an instrument as I am. But I could get behind tubas deserving a double cut :-D

Oh, even cooler NPR piece (with transcription) talking about Mexican Bandas and the Tubas in them...