from "A History of God"

For reasons that we do not entirely understand, all the chief civilizations developed along parallel lines, even when there was no commercial contact (as between China and the European area). There was a new prosperity that led to the rise of a merchant class. Power was shifting from king and priest, temple and palace, to the marketplace. The new wealth led to intellectual and cultural florescence and also to the development of the individual conscience. Inequality and exploitation became more apparent as the pace of change accelerated in the cities and people began to realize that their own behavior could affect the fate of future generations. Each region developed a distinctive ideology to address these problems and concerns: Taoism and Confucianism in China, Hinduism and Buddhism in India and philosophical rationalism in Europe. The Middle East did not produce a uniform solution, but in Iran and Israel, Zoroaster and the Hebrew prophets respectively evolved different versions of monotheism. Strange as it may seem, the idea of "God," like the other great religious insights of the period, developed in a market economy in a spirit of aggressive capitalism.

Who then knows whence it has arisen,
Whence this emanation hath arisen,
Whether God disposed it, or whether he did not,--
Only he who is its overseer in highest heaven knows.
Or perhaps he does not know!

Religion starts with the perception that something is wrong [...] Effectiveness rather than philosophical or historical demonstration has always been the hallmark of a successful religion

Indeed, God is dependent upon man when he wants to act in the world--an idea that would become very important in the Jewish conception of the divine.

That idea is so lovely - and so foreign to the simplistic version of the "Judeo-Christian" God I was taught, where it would be blasphemy to think of Omnipotent God as dependent on anyone or anything.

You know what? I take it back. Hearing some of the God-ish justifications given for passing anti-Abortion, Fertilization=Human bullshit passing Oklahoma? "We believe that God has a special plan for every single life and every single child" -Stitt -- clearly thinking like you are a conduit and manifestation of God's Will is fraught, and can be used for good or for evil. it's not all just cute and pleasant little mitzvahs, it's bodily-autonomy-violating bullshit, and we do not live in a theocracy.

The Greek God could be discovered by human reason, whereas the God of the Bible only made himself known by means of revelation. A chasm separated Yahweh from the world, but Greeks believed that the gift of reason made human beings kin to God; they could, therefore, reach him by their own efforts. Yet whenever monotheists fell in love with Greek philosophy, they inevitably wanted to try to adapt its God to their own. This will be one of the major themes of our story.

In about 178 the pagan philosopher Celsus accused the Christians of adopting a narrow, provincial view of God. He found it appalling that the Christians should claim a special revelation of their own: God was available to all human beings, yet the Christians huddled together in a sordid little group, asserting: "God has even deserted the whole world and the motions of the heavens and disregarded the vast earth to give attention to us alone."

A distinction between esoteric and exoteric truth will be extremely important in the history of God. It was not to be confined to Greek Christians, but Jews and Muslims would also develop an esoteric tradition. The idea of a "secret" doctrine was not to shut people out. Basil was not talking about an early form of Freemasonry. He was simply calling attention to the fact that not all religious truth was capable of being expressed and defined clearly and logically. Some religious insights had an inner resonance that could only be apprehended by each individual in his own time during what Plato had called *theoria*, contemplation.

Within the soul there are three properties, therefore: memory, understanding and will, corresponding to knowledge, self-knowledge and love. Like the three divine persons, these mental activities are essentially one because they do not constitute three separate minds, but each fills the whole mind and pervades the other two

The book has long passages outlining the vision of the Trinity, which honestly to me feels like on of the more arbitrary and ad hoc aspects of modern Christianity.

In the same way, the scientific vision of our own day has made much classic theism impossible for many people. To cling to the old theology is not only a failure of nerve but could involve a damaging loss of integrity. [...] Yet the ultimate failure of [the Faylasufs'] rational deity has something important to tell us about the nature of religious truth. Armstrong, Karen. A History of God (p. 256). Random House Publishing Group. Kindle Edition.

One of the problems of ethical monotheism is that it isolates evil. Because we cannot accept the idea that there is evil in our God, there is a danger that we will not be able to endure it within ourselves.

Luria identified anger with idolatry, since an angry person is possessed by a "strange god."

Mendelssohn saw life without God as meaningless, but this was not a passionate faith: he was quite content with the knowledge of God attainable by reason. God's goodness is the hinge on which his theology hangs. If human beings had to rely on revelation alone, Mendelssohn argued, this would be inconsistent with God's goodness because so many people had apparently been excluded from the divine plan.

To know that what is impenetrable to us really exists, manifesting itself to us as the highest wisdom and the most radiant beauty, which our dull faculties can comprehend only in their most primitive forms--this knowledge, this feeling, is at the center of all true religiousness. In this sense, and in this sense only, I belong to the ranks of devoutly religious men. 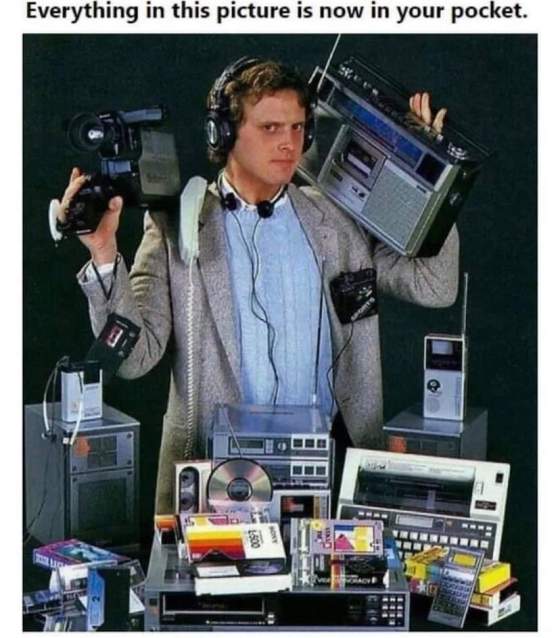 Don't know if I posted "everything in this picture is now in your pocket", how one smartphone does all this stuff like someone raided a Radio Shack, but I love it. There's also this ad via this huffington post 2014/2017 article 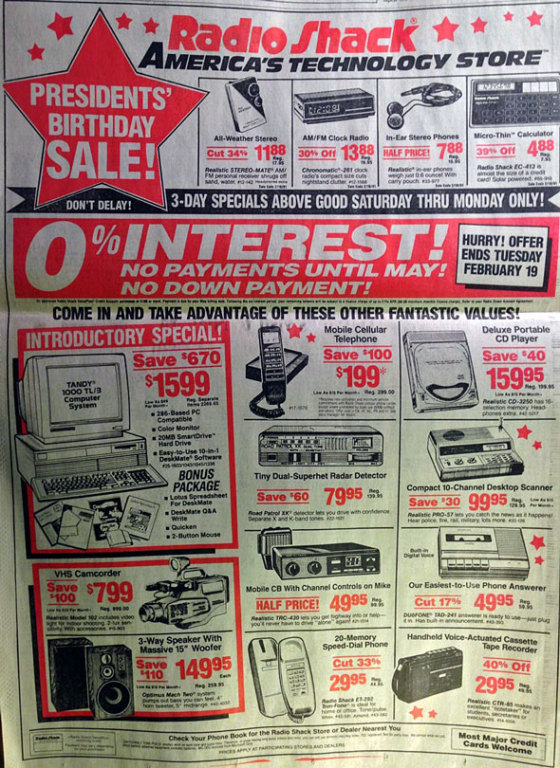 If you hear a human ask, "What could go wrong?" Do NOT involve yourself. If you hear one ask for their beer to be held, leave immediately. If you encounter a man named "Murphy" that no humans seem to see, RUN.

What's really cool is Trump is even older, and Biden older than that.