videogame
January 27, 2014
Yesterday I finished up Global Game Jam 2014. Working on a tiny team, we made more of a toy than a game: 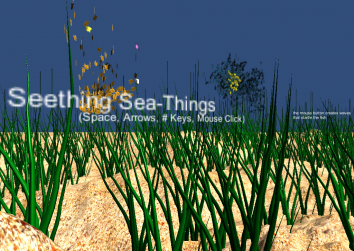 Seething Sea-Things
It's entirely encoded in Unity, which was a first for me... the other programmer on the team (and who originally pitched the general idea in the team formation part) Andrew Grant was an excellent and patient teacher-- his tolerance for being interrupted with questions was superb.


Tendrils is a game I made for Glorious Trainwreck's Klik of the Month #55.

You can also just sit and watch the organic oddness of it!

This is the HTML5 Processing.js version. IE users can play the java version Man, BattleTanx Global Assault for the N64. What a fine game, that really knows what it's about. Yikes Robert Kraft man-kisses as embarrassingly as he high-fives! and that game- talk about by the skin of their teeth... That kid from the show "Touch"-- I want him on my MIT #mysteryhunt team next year (we led lower half of standings, good for small team)