(2 comments)
December 5, 2003
Link of the Moment
Despite bad navigation that always seems to require one extra click, Quarter Bin has some interesting essays on comics...surprisingly academic and deep, like this essay on Popeye. (Interesting to contrast and compare that to the previously kisrael'd The Previous Adventures of Popeye the Sailor.) 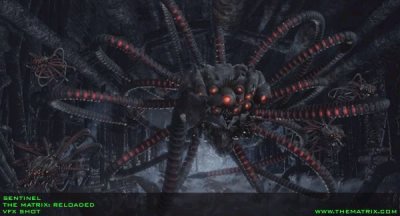 Sentinel, reasonably bad-assed warrior robot from 2003's
so-so sequel Matrix Reloaded.
Thanks to Dehumanizer for grabbing the images to prove something that was on the back of my mind (also an unnamed AIM buddy for giving me the link.) On the other hand, after reading Larry Niven's "Known Space" novels, I realized how much SC2 cribbed from him...

Horoscope of the Moment

Aries: (March 21-April 19)
You fail to understand the primordial mystery of the funk: You can still have it no matter how many times you give it up.

More Matrix of the Moment
In today's comments, LAN3 also points out a page in Spanish, Comparación De Los Filmes "Dark City" & "The Matrix". It's actually easy to pick up in Spanish (and as LAN3 points out, you can learn fun new phrases such as "Bichos tentaculoides.") or you can just be a wuss and check out the semi-decent Google language tools translation of the page.

Some of the points are fair, but if there's only a year difference between the films, there was probably a lot of overlap in their production times, and both probably borrow from previous clichés of the noir genre. Overall, I'd say "The Matrix" is the superior film in terms of pacing and really toying with some cool philisophical ideas. Not to mention being much higher on the "kick-butt-kung-fu-o-meter". Both are great flicks, though.