My grandmother was actually from Dublin, which I believe qualifies me for Irish citizenship. That pleases me and makes me feel quite international. However I already have a UK and US citizenship, which makes matters very confusing at border crossings. I was once held at the Canadian border for 3 hours by border guards, who were confused by my British accent, California Drivers License, Boston home address, Michigan license plates and lack of a passport. Imagine that!
--Sarah
(6 comments)
March 17, 2004
Product of the Moment
So the other night I saw a commercial for the Phillips HeartStart Home Defibrillator. Which is, for some reason, mildly amusing to the easily amused in a Homer Simpson getting one and then realizing he can eat ALL the bacon he wants, he'll just self-defib through any heart attacks and go "ahhh" kind of way, though I'm sure for some people it's very serious indeed. But what's odd about the tv pitch is, on the one hand they say "have this around, Often no prior symptoms" scare tactic but then they mention that you need a doctor's prescription. Maybe that's not quite a contradiction, but it seems a little odd, or at least paranoia inducing.

Of course, being a separated and soon to be divorced guy, I become aware that this kind of product pretty much relies on someone else being arond.

Paranoia of the Moment 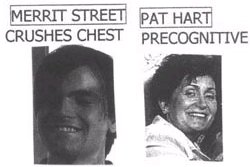 In the spirit of yesterday's parnoid with a slashdot account, it's the works of Tammy, who seems to have some serious problems. She'd write these long, Dr.-Bronner's-Soap-like rambles on sheets and hang them outside her house, but if you're in a hurry, just check out the pages about people (looks like they think I'm trying to eat up their bandwidth, go to main page, about 3/4 of the way down, the one with all the snapshots) with various psychic powers, two shown here. (It took me a second to realize that Judy Nielson's ability of "HEAVY PERIODS" probably means causing that in other women, not just having them herself.) The author has a bit too much schadenfreude in it all, but it's still compelling.

Actually, I just realized that those pages remind of Jesse Reklaw's brilliant compilation Applicant, scavanged from Ph.D. applicant files (1965-1975) where Reklaw takes the headshot and a really telling, tiny snippet from that person's letter of recommendation. (The quote, which the applicant him or herself wasn't privy to, often says more about the time period or the letter's author than the applicant...on the other hand, you can look at the picture and guess that some are strangely apt.) That booklet is only $2...buy it, it's the best $2 you'll spend this week, I promise you.