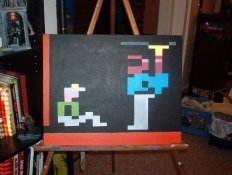 At Philly Classic, a woman named Aimee Dingman had a bunch of Atari-themed-art, namely, pixel-perfect acrylic paintings of famous atari characters and scenes. I didn't buy one, they price/size ratio was just one scale too large for me, though I was thinking using screenshots and a good photo printer might make some interesting results, in a rip-off kind of way. (Just for my own amusement and decoration.) Actually, as seen in the background of that photo with me and Howard Scott Warshaw, AtariAge printed up some large posters of the various cartridge fronts. I wonder where I could get access to something that could print that size, and how much it would cost...

Art of the Other Moment
Elsewhere in the art world, Niff Actuals are a cool crosspoint of handcraft and manufacture. (Be sure to click the "More Of This" buttons for closer looks.) I especially liked the Non-Specific Tape Measure and the 'It's My World' Fully Rotating Globe.


When it comes to humility, I'm the greatest.

Game of the Moment
Yahoo auto has set up a car racing game on a Times Square billboard that people can play by calling an 800-number on their cellphone. The gameplay is simplified speed up and slow down control only (like old kid's racing sets) probably because of lag time but still, it's a nifty idea.

News Quote of the Moment


"[Justice Souter] uses that wonderful phrase 'ceremonial deism,' a legal term of art for the 'God of the Hallmark cards'"

It always surprises me how intriguing a read it is. "It doesn't sound divisive? That's only because no atheist can get elected to Congress." was a good Newdow zinger, on the unanimous 1954 vote to add in "Under God". And, independent of one's belief, it's hard to argue that "one nation, indivisible, with liberty and justice for all" doesn't flow better than "one nation, under God, indivisible, with liberty and justice for all."