it all comes down to alcohol and caffeine

On my flight back I read an excellent book, "A History of the World in 6 Glasses" by Tom Standage, the impact on human culture by beer (where it came hand in hand with the harvesting of grains, and the birth of cities and civilization), wine (and the intellectual associations it still carries), hard liquor (where it had a role in the West's horrific slave trade, as well as spurring America to fight for its independence), coffee (where coffehouses were like the powerhouses of the age of enlightment), tea (almost the raison d'etre of the British Empire), and finally Coca-Cola (symbol of America's leadership role in the 20th Century.)

I hadn't realized how important coffehouses were in England and France. Standage portrays them as the websites of the age, because the various coffeehouses often had a particular "interest group" focus, from politics to philosophy, from stocks and investment to the theater. (In fact The Tatler used the coffeehouse names as captions for its own category division.) 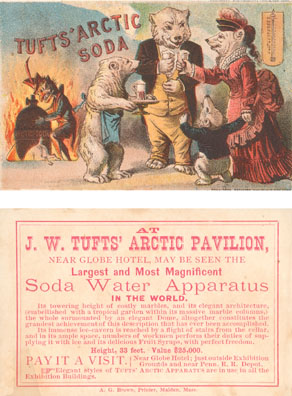 I think, though, that my other favorite part of the book is the fact that at one point in my nation's history there was a lawsuit entitled United States v. Forty Barrels and Twenty Kegs of Coca-Cola. The idea of a big keg of sugary syrup mutely taking the witness stand is irresistible.

I also read about the "Tufts' Arctic Soda Water Apparatus". James W. Tufts lived around Boston in the late-1800s but I couldn't figure out if he was related to the family responsible for Tufts University.

Anyway, a very well-written and researched book with a great eye for the sweep of pretty much all human history.