paris in the twentieth century via the nineteenth century

(3 comments)
September 24, 2006
I read most of another book on the way back, a (previously) "lost novel" of Jules Verne called "Paris in the Twentieth Century". The cynic in me wants to say, pity it didn't stay lost... some of the technology predictions were interesting, but mostly it was a chance for Verne to sound a panic about the the threats of technology and "modern" outlooks (once or twice those are painted as the "American" ways) for classical culture and literature.

The Wikipedia page summarizes it pretty well. Of course I dislike it because I tend to be on the "other side" of the equation, enjoying technology and the like, but also I hate books that have a whiny main character who feel society has done them personal disservice just by being its own dumb self. (See: "Catcher in The Rye") But also, it's such a dour view of humanity and technology...even in a society as insanely techno-riffic as the one Verne paints, to me it seems unlikely that admiration for the "classics" would be an object of such derision among the general population. The thing that Verne doesn't get is that in that kind of culture... sort of a pinnacle of technology and business geekdom... obscure interests are often celebrated, and there's often at least lip service paid to the classics, even if they're largely ignored in practice.

But... I certainly did dig the cover art: 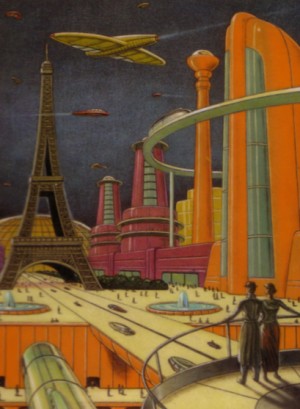