But it's an hour of reading, which is much more satisfying (and cheaper) than a halfhour drive with talk radio or NPR.

Yesterday I was legitimately startled to find myself at Alewife station, the end of the subway ride, since I had zero recollection of transferring from the green line to the red. (Doubly startling because I didn't think my book was all that engrossing.) I could remember noticing how those damn "Metro Daily"s were caught on the wheel area of the green line train, pushing a Red Bull can along, and with a great force of will, I could kind of recall finding a seat on the red line, but only sort of.

I used to get lost in books when I was a kid... I remember times in sixth grade when I wouldn't even respond to my name being called, not to mention developing the ability to navigate the halls with my nose in a book. I thought I had lost that tendency, but now I'm not so sure.

I remember seeing some propoganda for kids about how reading builds powers of concentration. Do you think that's the case? Does reading as a discipline form a better mind in and of itself, or is it more dependent on the quality of the ideas embedded?


I walked beside the reflecting pool that more than doubles the majesty of the Lincoln Memorial. It's a genuinely impressive sight. I walked up the steps, through the colonnade and into the Doric temple-inspired building to see the 20-foot marble statute of Lincoln. He looked pretty much as he had done when he showed up in Star Trek. Only taller. And more marbly.

A gently funny kind of book. For me some of the amusement came from it being a reference to one of the few original Trek episodes I hadn't seen, but still caught from a reference to the episode in some god-awful Star Trek comic. (I think the aliens from the historical figures planet were fighting it out with the guys who made it so the Federation and the Klingons couldn't fight. (Heh, trivia note from the first link: At one point the Excalbian posing as Lincoln says, "There's no honorable way to kill, no gentle way to destroy. There's nothing good in war except its ending." This quote is often erroneously attributed to the real-life Abraham Lincoln)

I'm try speed-dating tonight. Somehow, I don't think I should bring up the whole "oh yeah remember that episode where the aliens beamed up Abe Lincoln to the Enterprise I didn't see it but I read about it in a comic it was pretty cool." 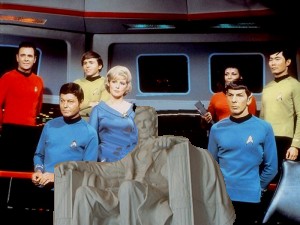 This image was slightly funnier in my head

Random Links of the Moment
I found a strange little frisson of satisfaction in both of these stories: A "smart" computer program has been busted for practicing law without a license, and one of my favorite songs Tom's Diner was the target song during the creation of the .MP3 music format.

I miss Napster. I didn't use it much, mostly to track down obscure tracks, so its replacements that offer a similar kind of bulk but without the obscure tracks just miss the point for me.