gadget
(1 comment)
March 25, 2007
So my Sony Palm (Clié SJ22) died the other week. Palm is, I fear, a dying brand. (You can even get those Treo-phones with Microsoft's OS, which is an abomination, an affront to people who dig good UI design) and the selection of models is shrinking. 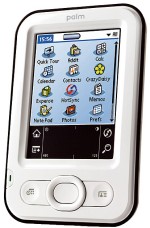 I took a small gamble and tried Palm's $99 entry-level "Z22" and, mirabile dictu, it is fantastic. Cheap and light, with a comfortably curved rear shell and the same UI that has been topped in the 10 years since the first Palms emerged... so good. The screen isn't as high quality as the old Sony, but Palm has never needed more than that basic 160x160. I have some other quibbles, the 4 way pointer thing isn't as useful as the Sony scrollwheel, and not as reliable as the up-and-down buttons on the old units, and I kind of miss having 4 application buttons, but still. I slapped on the included screen protector and don't worry about it not having a case or cover.

I'm almost surpised this came from Palm, whose design group seemed stuck on the idea that "compact" means flat but wide and long (so as to not sacrifice screen real estate, I guess, but disregarding the hand- and pocket-feel.)

I was surprised how long I was in that "looking for excuses to fiddle with it" zone with this gadget. Many well-designed devices will grab me like that for a bit, but I felt the compulsion for over a week, even with a decade of familiarity with the basics of it. Other folks dig the higher-end models, with wifi, or integrated phones, but this one is compact enough that I don't mind it as a standalone device, and cheap enough that I worry about it less.

So, now I'm back to having... yeesh, a decade's worth of datebook, lots of notes, addresses, and my current Todo stack around with me at all times. It's not as important as when I was journaling on it instead of the web, but I dig it.


[...]There was another bit of low-rent, half-assed psycho philosophy that I'd tacked on behind it somewhere along the line- sort of a corollary to "Deal with it"--namely, "Don't be a shit."

This doesn't mean I became some sort of namby-pamby little Candide with a smile in my heart and a kind word for even the lowliest vermin. Hardly. But choosing not to be a shit just made sense. You want to get good service in a store, in a restaurant, or while dealing with a government agency? Then don't be a shit. Remember that in most cases, the people you're dealing with are under just as much stress and have just as many unspoken crises facing them as you do, so show a little patience--and tip well.

He's been a columnist in some indy papers, a grizzled veteran of the school of hard knocks, suffering from a degenerative vision condition and all kinds of physical and karmic maladies.

It sounds like he's a bit of a barfly, and the book reminds me how nice it can be to just sit in a bar and hang out in some quite and dark recess of a bar, especially with just 2 people.

The quote now reminds me of a "This American Life" piece yesterday that came to the conclusion that, for the most part, people tip what they always tip, regardless of the friendliness of the server. But if you can make life feel a little better for everyone involved, even if it's just the American faux-friendliness, why not?